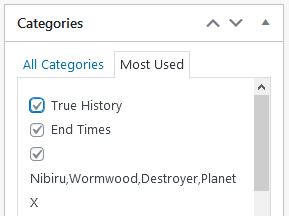 The Dark Winter Younger Dryas II has begun. Some are familiar with this forboding time of food and fuel shortages, economic crises, disease and death, political strife and war (known as the Four Horsemen of the Apocalypse and predictively programmed in GAME OF THRONES), what no one is allowed to speak about is the fact that all of this is happening because NIBIRU IS HERE, Wormwood, and its accompanying ‘moon’ bodies and meteorite/asteroids and ‘debris’ – a cross-shaped system shaped like the water molecule in motion (my gravatar) – on a long-encyclic elliptical orbit responsible for all the previous ‘”climactic events” the Indian (Hindu) culture has for many ages called KALI YUGAS. I call it “God’s wrecking ball”. The alphanumeric agencies of all governments very effectively hide these and every other fact: few indeed are capable of receiving the truth so counter to everything they [think] they know.

Evidence shows The Younger Dryas was triggered by impacts from several fragments of comet that hit Earth.

“The Younger Dryas impact is thought to have occurred between 10,800 to 10,900 BC. Again, it might have been caused by the Taurid meteor stream, although this time the general view is that we collided with a swarm of comet debris, rather than a single object. The impact was so devastating and covered such a wide area, that it is thought to be responsible for an entire geological age (a mini ice-age lasting 1,300 years) known as the Younger Dryas period when temperatures in the northern hemisphere were 27 degrees Fahrenheit (15 degrees Celsius) lower than they are today.” (source Ancient Origins)

Last week I wrote about the solar flares and the object coming out from behind the sun, and pointed out the absolutely insipid downplaying including NASA inviting readers to play an asteroid-spotting game as not only NASA but NOAA, the NWS (National Weather Service) and every ‘horn‘, as scripture calls it (government, military, academic, religious, media, corporate entity et al) ignoring the elephant in the room.
https://eatingtoascend.com/2022/12/15/powerful-coronal-mass-ejections-happening-now-december-15-26th/

The Great Reset 4th Industrial Revolution is more than human species genocide NWO takeover: it’s the Rapture cover-up, and the accompanying chaos will usher in the CBDC, and Tribulation including the facets of Dark Winter pundits talk about: economic collapse, rigged elections, censorship, and government tyranny. What they are oblivious of is the really big picture and it’s Younger Dryas time again.

This is the reason for “Resilience Zones”, for instance. The elite have to house their genetically altered slaves somewhere, and the geographic and topographic country changes resulting from the cataclysms of volcanoes, earthquakes, flooding of both water as well as ‘immigrants’, supply chain failure, power grid breakdown, plasma arc storms and of course the orchestrated pandemics in tandem with the microwave radiation of 5G (Corona = Crown = radiation of energy + mRNA and spike proteins) and it’s a Dark Winter indeed, for seven years.

One thing Jesus repeatedly said, stressing it perhaps more than anything else when asked  by his disciples what they needed to know were signs of his promised coming (not to be confused with The Second Coming) was TAKE HEED THAT NO MAN DECEIVE YOU (Matthew 24:4). Almost everyone is deceived. Personally, I do not know a single soul in real life who understand what is being conveyed here. There are, though, individuals I know through connecting through the computer/internet realm, and I do thank God for that! You know who you are!

*Jehovah uses the elliptical Nibiru system transits because this is actually dimensional. Words fail to encompass relating this.

It’s happening. Dark Winter, yes. That’s obvious: it’s 5 below zero outside right now and the wind chill is minus 20 and falling. Not to date set but the Hanukkah Rapture seems just right, as Papa Bear would say.

I’m signing off  with that, my beloved readers. You know I love you, and we love Truth together as one body in Jesus Christ, who is our life, and *we shall see him as he is, for we shall be like him… Light once again.

“Beloved, now are we the sons of God, and it doth not yet appear what we shall be: but we know that, when he shall appear, we shall be like him; for we shall see him as he is.” – 1 John 3:2

God bless you, and let your light shine even more brightly as we wait for our shepherd to call!