In between all the serious issues we deal with, and the writing and research and emails and web “stuff” (which I have a steep learning curve with, apparently!), I try to – even if it seems sometimes futile, for example, why preserve a few pints of salsa and fermented vegetables if the “world is gonna end” (somebody would eat it who needs food if I dematerialize? That’s a thought…) – but, for me, coming from a suddenly stunted lifetime of being a non-GMO organic farmer and livestock owner and food preserver/farmer’s market vendor (and chicken lady!), it’s grounding, and I mean that. But this is a fact: everyone needs to grow food. I started 42 years ago! Now we need to grow indoors, due to all the heavy metals, toxins & nanotechnology from the geoengineering. Always keep that in mind!

Sometimes it’s great to just work at a task with the muscle memory and skills years have given me. I don’t need recipes, measuring utensils or etc. I just need a task and my self. I do it monastically, I suppose. Sometimes in silence, getting into and blissing out on the high-pitched tones that are relativey drowned out in the whitewash of satan’s digital technology, screen refresh rates, CSS layer loads which are repetively programming us, the 440 Hertz’s, the CAT5 wire leakages, the electrosmog, the hum of electronics, the fibers the frequencies activate… for an EMF-sensitive AFFLICTED person who deals with chronic Lyme and Morgellons, it’s beautiful to unplug.

Sometimes I listen to videos or frequencies. Lately, as you know, I have been listening to Mooji and Sadhguru. 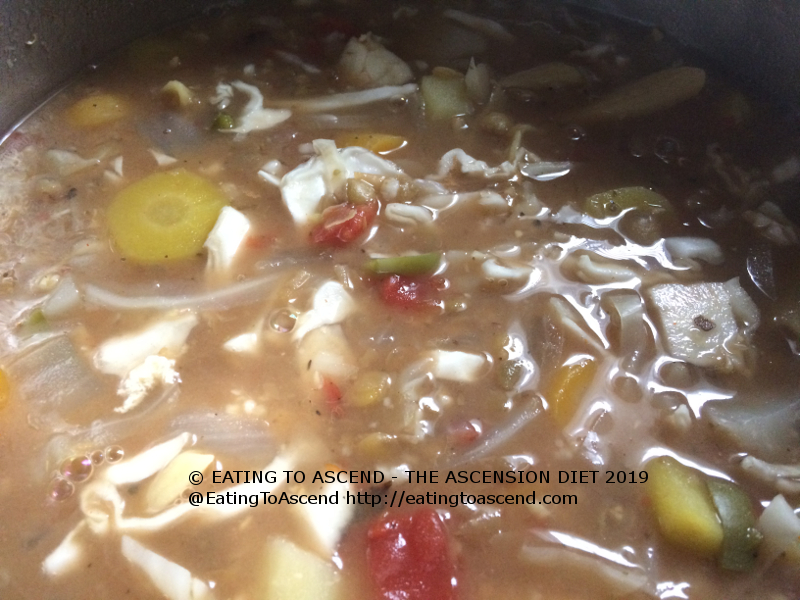 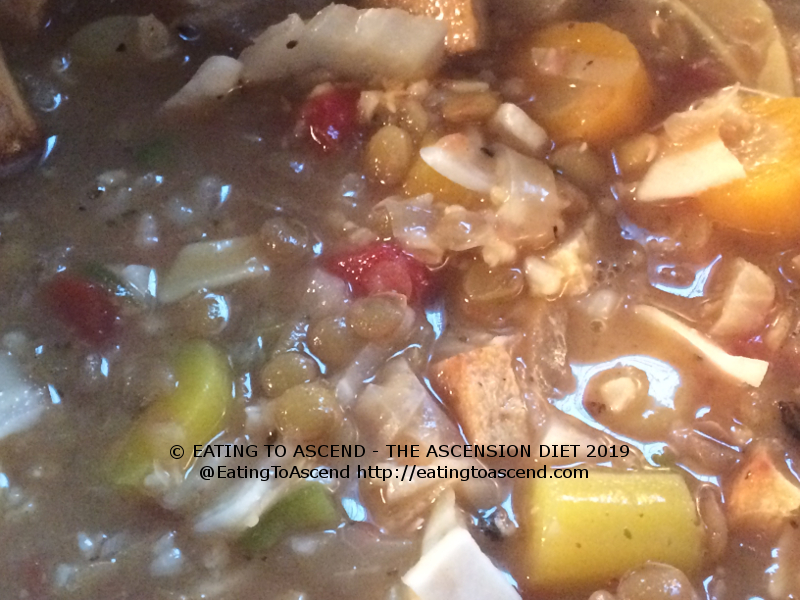 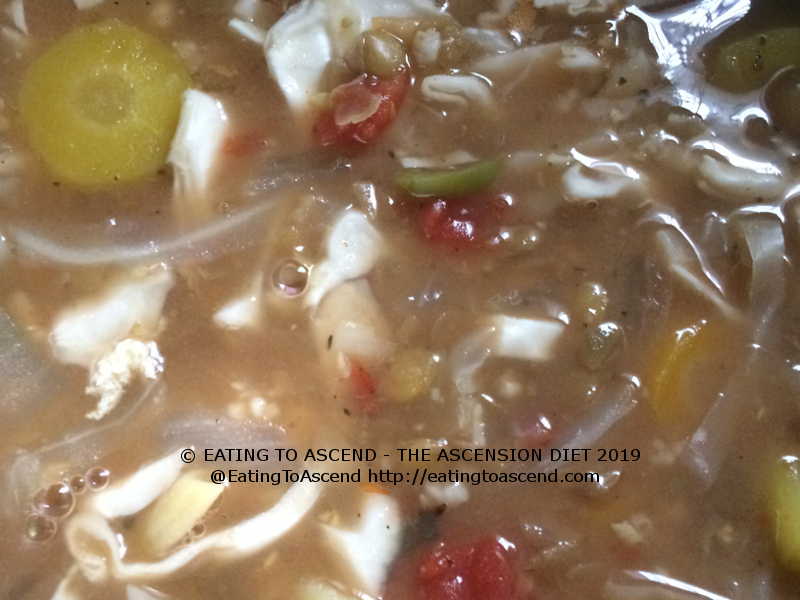 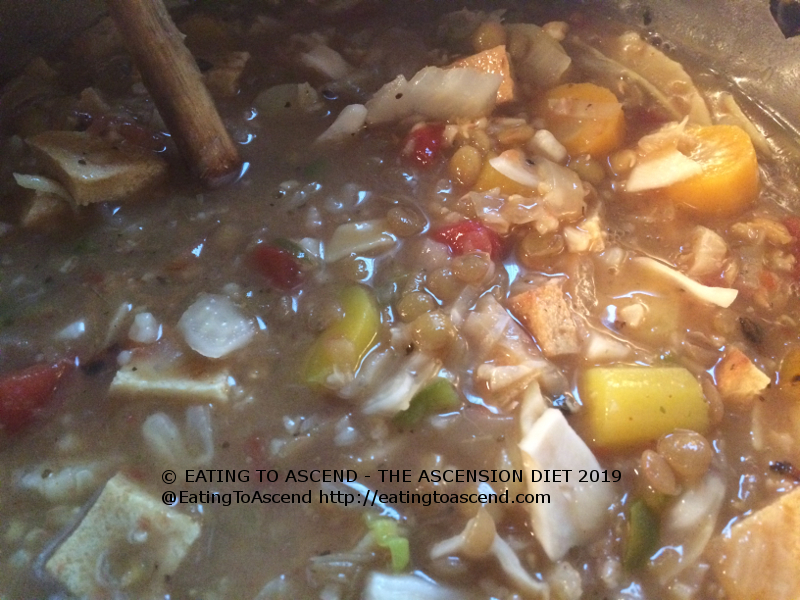 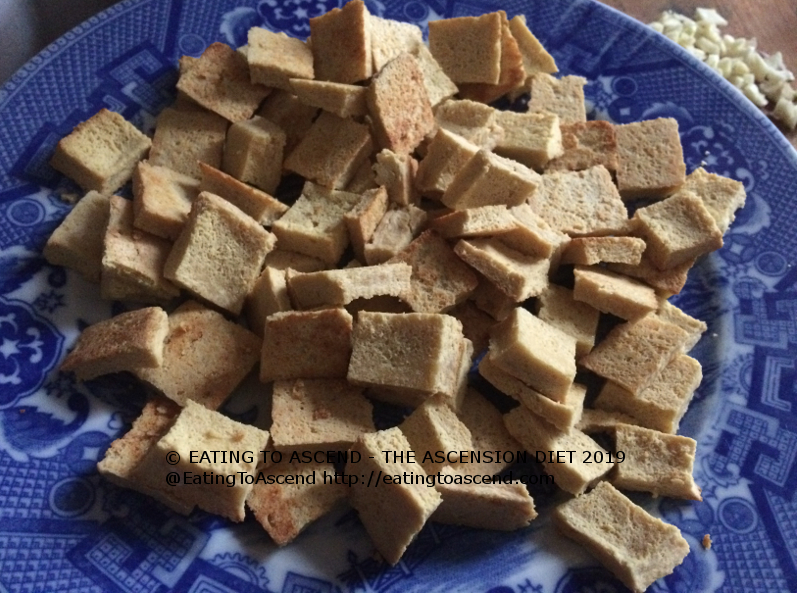 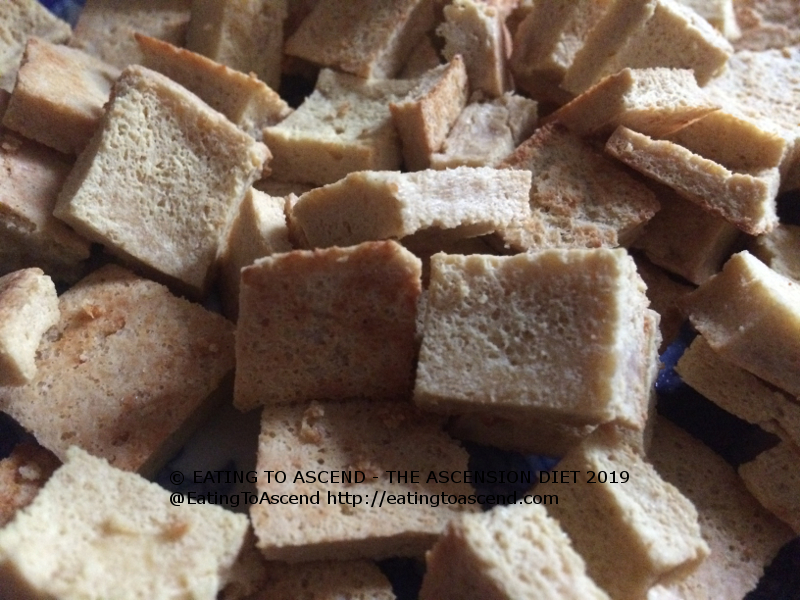 So here is a soup I made. It’s a distilled water base, with ~1 cup of imported Indian Green Lentils, ~2/3cup whole pinhead oats, 1/2 fresh shredded cabbage, 7 peeled and cut into 3/4″ to 1″ pieces non-GMO local multicolor carrots, a sweet white onion, cut into 16ths around its meridian (I think like that), 3 small local green peppers from a local church free-pick sidewalk garden, chopped fresh garlic (more saved to add at end) a TBS Pink Himalayan Salt, a TBS of dried oregano (cheap brand, Dollar Store),and 1/2 tsp smoked Hungarian Pepper. While that simmered, I drank the liquid from a quart of fermented probiotic cabbage, and set the cabbage aside – about 2 cups – to add close to the end, to keep the beneficial microbes alive, and baked the tofu, which I had wrapped in a tea towel (linen, no products or chemicals used to wash it, I wash only with borax, baking soda and vinegar, sometimes Fels Naptha for stains, with elbow grease!) and weighted. That removes excess water. Then I sliced and cubed it and baked it at 375′ on an olive-oiled baking sheet until firm, and set aside. After bringing the soup back to temp upon the addition of the room-temperature uncooked probiotic cabbage, I folded in the baked tofu and the rest of the aired garlic (that allows the active agent Allicin to reach peak funtion as anti-oxidant and parasite-repeller).

At no point did I allow it to reach boiling once I added the probiotic cabbage. Delicious! And as Jesus told us in the Essene Gospel of Peace, Book One, it demanded chewing! As a vegan, it can be really satisfying to have a “comfort food” like a hearty vegetable soup. Like any “gramma”, I can store some in the freezer, and eat the rest through out the week. The way I think, with the advent of the FORTNITE GAME predictive game changes, it may be moot to have made soup. But making soup was a quiet exercise. I don’t have gardens outdoors to work, or a way to live amongst the four angels in a physical way at all anymore. I do this on the innerstanding platform. but, since that;’s digital, as I said, the frequencies are really negative. So, the soup. Quietude. Almost devotional, monastic time.
I like that. I like the quiet space.