It occurred to me recently that the word SIN is interchangeable with the term GAIN OF FUNCTION, which which was done to the Adamite race… history in context we may have been privy to which the synagogue of Satan called the Catholic Church removed, as well as tampering with all versions and translations except the Targum and the Tanakh.

Try it yourself.
Think of a verse or phrase with the word “sin” in it, and replace it with “gain of function”.
Because that is exactly what we are dealing with, a hijacked light body species tainted with the devil’s
third strand mRNA serpent seed.
THE MADE A BUSINESS OUT OF IT
THEY CALL “HEALTH”,
in true satanic inversion.

“For I know that in me (that is, in my flesh) nothing good dwells; for to will is present with me, but how to perform what is good I do not find.”

“O wretched man that I am! Who will deliver me from this body of death? I thank God – through Jesus Christ our Lord!”

“So then, with the mind I myself serve the law of God, but with the flesh the law of sin.”

Jehovah the Most High GOD forbade the eating of all living things and had the fallen Adam and Eve, who had descended into flesh bodies after she was raped by Lucifer and shared the fruit from the Tree of Knowledge with Adam – “you can be as gods”,  she was connived by the serpent, Satan in reptilian form, and through the forbidden fruit, which had his RNA in it, was genetically altered, or as YHWH calls it, polluted.

This is why Adam and Eve were told to eat a plant-based diet: “And God said, Behold, I have given you every herb bearing seed, which is upon the face of all the earth, and every tree, in the which is the fruit of a tree yielding seed; to you it shall be for meat.” – Genesis 1:29, so that they would not eat miscegenated animals the fallen ones had genetically altered. The GAIN OF FUNCTION when Satan inserted his hijacking genetic code, an artificial intelligence operating system, into Eve, a being of pure light, changed her frequency and brought her into form, as it did Adam. Within days their bodies became time-bound and onerous with pain, hunger and thirst.

What can we really know? We do know that for the most part the only pre-fall of Atlantis literature is the Emerald Tablets of Thoth [Smagardine] and from the tohu-bohu remianing of the earth after YHVH reset it 6,000-plus years ago, The Word, THE LIGHT spoke this earth – the earth they are destroying, for it is now UNSAVEABLE AND MUST BE DESTROYED FOR GOOD…

“But the day of the Lord will come as a thief in the night in which the heavens shall pass away with a great noise and the elements shall melt with fervent heat; the earth also and the works that are therein shall be burned up.
Seeing then that all these things shall be dissolved, what manner of persons ought ye to be in all holy conversation and godliness.
Looking for and hasting unto the coming of the day of God, wherein the heavens being on fire shall be dissolved, and the elements shall melt with fervent heat?
Nevertheless we, according to his promise, look for new heavens and a new earth, wherein dwelleth righteousness.
Wherefore, beloved, seeing that ye look for such things, be diligent that ye may be found of him in peace, without spot and blameless.” – 2 Peter 3:10-14

… and this is why we do all we can to remove the ropeworm as well as all the other parasites we can. They are archons, they are chimeras, they are stumbling blocks and hold toxins, heavy metals, bacteria, yeasts, molds and NANOTECHNOLOGY

This is why Ivermectin helps in the advent nanotechnology in the lung and GI worms is activated by WiFi and smart devices. 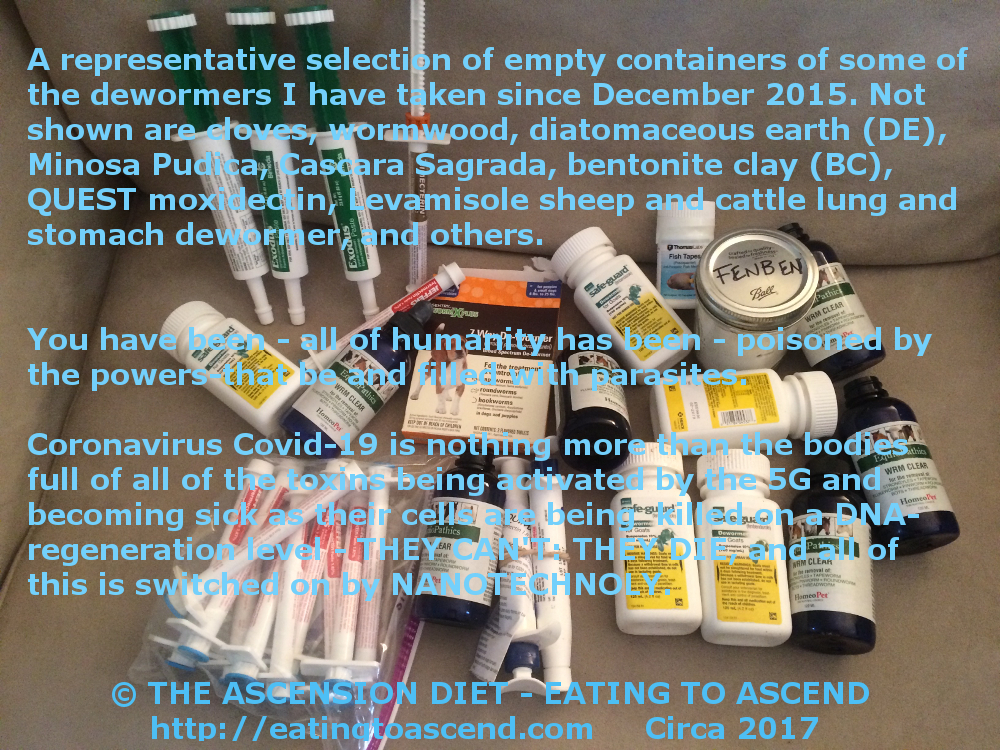 That avatar of Lucifer animating Pharaoh (so he,  Lucifer, can operate within Pharaoh’s body) below is responsible for every bit of pain and suffering every single living being endures.

We needed a REDEEMER to free us from the GAIN OF FUNCTION.

“I will gather them that are sorrowful for the solemn assembly, who are of thee, to whom the reproach of it was a burden.Behold, at that time I will undo all that afflict thee: and I will save her that halteth, and gather her that was driven out; and I will get them praise and fame in every land where they have been put to shame.”  – Zephaniah 3:17-19

Now we are all being sorely tested, in the final Earth Kali Yug.

It is so beyond bittersweet… We are each here because we were chosen to be here, and our souls choose our final address.

Please pray for those who would like to do the detox protocols but for whatever reasons cannot. Please pray for all who are struggling in desperately challenging situations. We are all being PURIFIED by the PURIFIER, and the dross is being burnt from our spirits to refine our souls and make our garments spotless.

“He who overcomes shall be clothed in white garments, and I will not blot out his name from the Book of Life; but I will confess his name before My Father and before His angels.” – Revelation 3:5

Never forget that God’s atomic weapon is the blood of Yehushua, and this truly is on the atomic level. We are power plants of LIGHT based on pure water, and the spinning water molecule forms a CROSS. #thought

Sin is a riddle, a mystery, a reality that eludes definition and comprehension. Perhaps we most often think of sin as wrongdoing or transgression of God’s law. Sin includes a failure to do what is right. But sin also offends people; it is violence and lovelessness toward other people, and ultimately, rebellion against God.

“For the wages of sin is death, but the gift of God is eternal life in Christ Jesus our Lord.” – Romans 6:23

“And Abel also brought an offering—fat portions from some of the firstborn of his flock. The LORD looked with favor on Abel and his offering, but on Cain and his offering he did not look with favor. So Cain was very angry, and his face was downcast. Then the LORD said to Cain, “Why are you angry? Why is your face downcast? If you do what is right, will you not be accepted? But if you do not do what is right, sin is crouching at your door; it desires to have you, but you must rule over it.” – Genesis 4:4-7

“If we claim to be without sin, we deceive ourselves and the truth is not in us. 9 If we confess our sins, he is faithful and just and will forgive us our sins and purify us from all unrighteousness. 10 If we claim we have not sinned, we make him out to be a liar and his word is not in us.” – 1 John 1:8-10

“He went on: “What comes out of a person is what defiles them. For it is from within, out of a person’s heart, that evil thoughts come—sexual immorality, theft, murder, adultery, greed, malice, deceit, lewdness, envy, slander, arrogance and folly. All these evils come from inside and defile a person.” – Mark 7:20-23

“He himself bore our sins” in his body on the cross, so that we might die to sins and live for righteousness; “by his wounds you have been healed.” 1 Peter 2:24

So we are dealing with not SIN, the abstracted concept many reject because “they never signed up for that contract” (a new age thought process), but GAIN OF FUNCTION, which has been made into the world’s food, beverage and medical industry, and for which cellphones are weaponzed to trigger people beconing factories for chimeras due to spike protein transmission and magnet assisted transfection, and described in my recent book.

Only Jesus can deliver us from evil, which is caused by GAIN OF FUNCTION, which is the insertion of mRNA into our genomes. Once we were LIGHT, and some of us will return to that LIGHT.

“that at the name of Jesus every knee should bow, in heaven and on earth and under the earth,” – Philippians 2:10

“And I heard every created thing which is in heaven, or on the earth, or under the earth, or on the sea, and all the things in them, saying, “To Him who sits on the throne and to the Lamb be the blessing, the honor, the glory, and the dominion forever and ever.” – Revelation 5:13

And HE will come on Archangel Michael, the White Horse, and GAIN OF function will cease to exist.

I believe that day is soon. May each of you be strong in the might of your spiritual armor and not lose heart when troubles are in your path. I love you all, and you are each in my prayers always.

See also
RNA Termination Killswitch Gain of Function.
DELIVERY FROM GAIN OF FUNCTION IS UP TO YOU