THE ALCHEMICAL VEIL OF THE ABYSS

December 27, 2022
THE HEAVIEST MIND CONTROL EVER IS HAPPENING NOW (THIS HAS EVERYTHING TO DO WITH PIGS)

Three days ago marked the day that Christ’s birth is celebrated, The Most High LORD God Jehovah in flesh as His son.  Not the pagan Ishtar ceremony. The Ethiopian calendar is nine years behind, so the true year is 2012 – 2013, aligning with the Mayan calendar and its dates for the arrival of Nibiru the Destroyer, the Red or Brown dwarf, the twin sun, Wormwood. And Jesus coming with the clouds.

So they have this Skynet up like the Egyptians did, or in the earliest accounts written by Adam and Eve in the books of the Cave of Treasures, a flat rock. The militaries of all nations and types exist to war against God – especially the Air Force and now the Space Force. Hiding the meteors falling in red showers are the artificial storms. Dimming the sun has officially launched: a geoengineering startup named Make Sunsets has begun releasing particles into the atmosphere,in an effort to alter climate. Luke Iseman, the cofounder and CEO of Make Sunsets, acknowledges that the effort is part entrepreneurial and part provocation, an act of geoengineering activism. “We joke slash not joke that this is partly a company and partly a cult,” he says. Bill Gates is backing the first high-altitude experiment of one radical approach called solar geoengineering. It’s meant to mimic the effects of a giant volcanic eruption. Thousands of planes would fly at high altitudes, spraying millions of tons of particles around the planet to create a massive chemical cloud that would cool the surface and diminish the amount of the sun’s rays reaching earth, thereby putting a halt to photosynthesis and agriculture, and freezing the rivers, lakes, bays, seas and oceans, killing all earth’s biological life and ecosystems.

You can hate them. They’re so inhumane they’re not even human {{{FRAZZLEDRIP, Pizzagate, Epstein, Weiner, Balenciaga, Adrenochrome and all those responsible for the ‘Covid gene therapies’}}} they are demons and they will be destroyed in the Lake of Fire.

But until they are, we have to remain strong and know our spiritual heritage. WE ARE MADE IN THE IMAGE OF GOD. He looks like us and he is our father and our mother both – but with 24 chromosomes only.  https://wyattmuseum.com/ron-wyatt-chromosome-count-in-blood-sample/2016-11862 We were once not even binary! Adam had a complimentary Eve but she came from his rib where special stem cells are, close to the heart. Only when the devil raped Eve and they descended in dimensions into flesh bodies did they copulate: a
punishment. 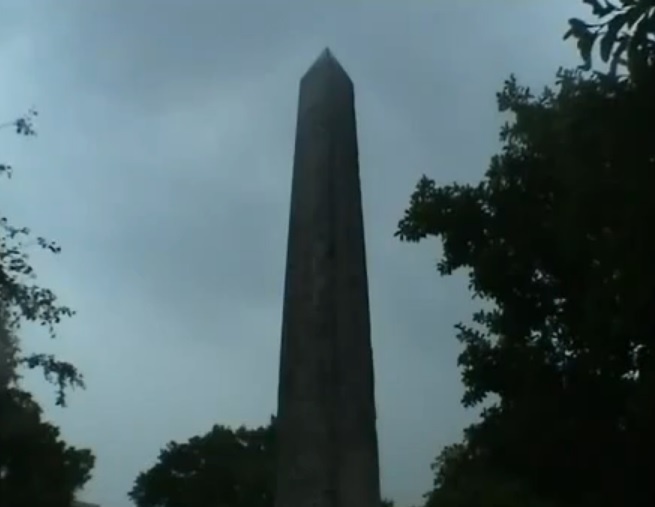 Meanwhile, another dimension  only called a country (due the the limits of the 1, 2 and 3 dimensions restricting the spirit in held thoughtforms) named Egypt expressed itself from the deep as Lucifer’s first city, and he split off into avatars, which are all devils. His memorable first post-Eden avatar was a crocodile named Sobek, then he became Osiris, twinning bodies with demonic spirits. This is the foundation of Dr. Mengele’s gross experimental fascination with twins and Rh Negative factor. In fact, Mengele was himself an avatar, just as all the elite reptilians are avatars #NotHuman 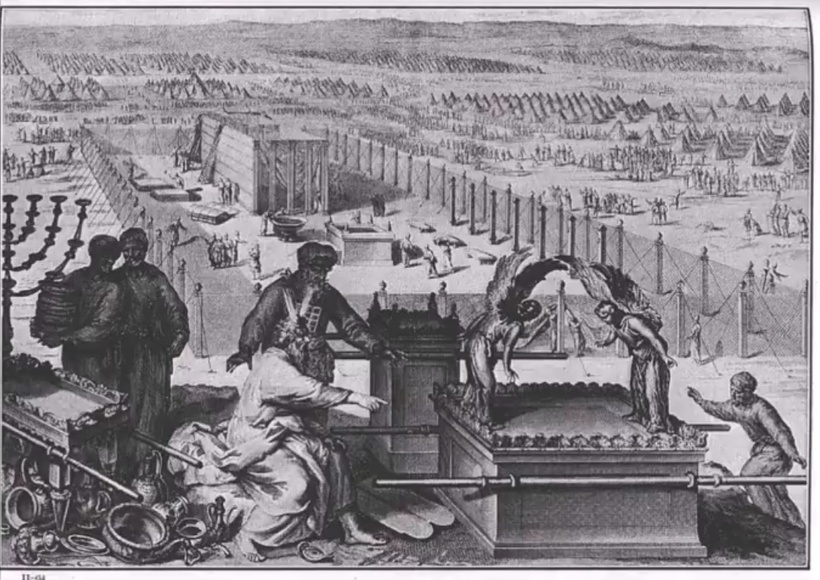 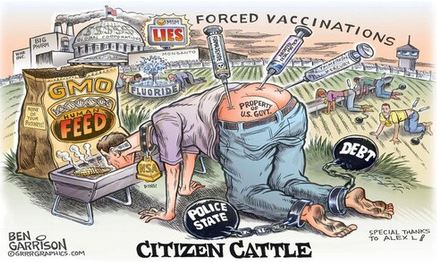 This has everything to do with pigs. 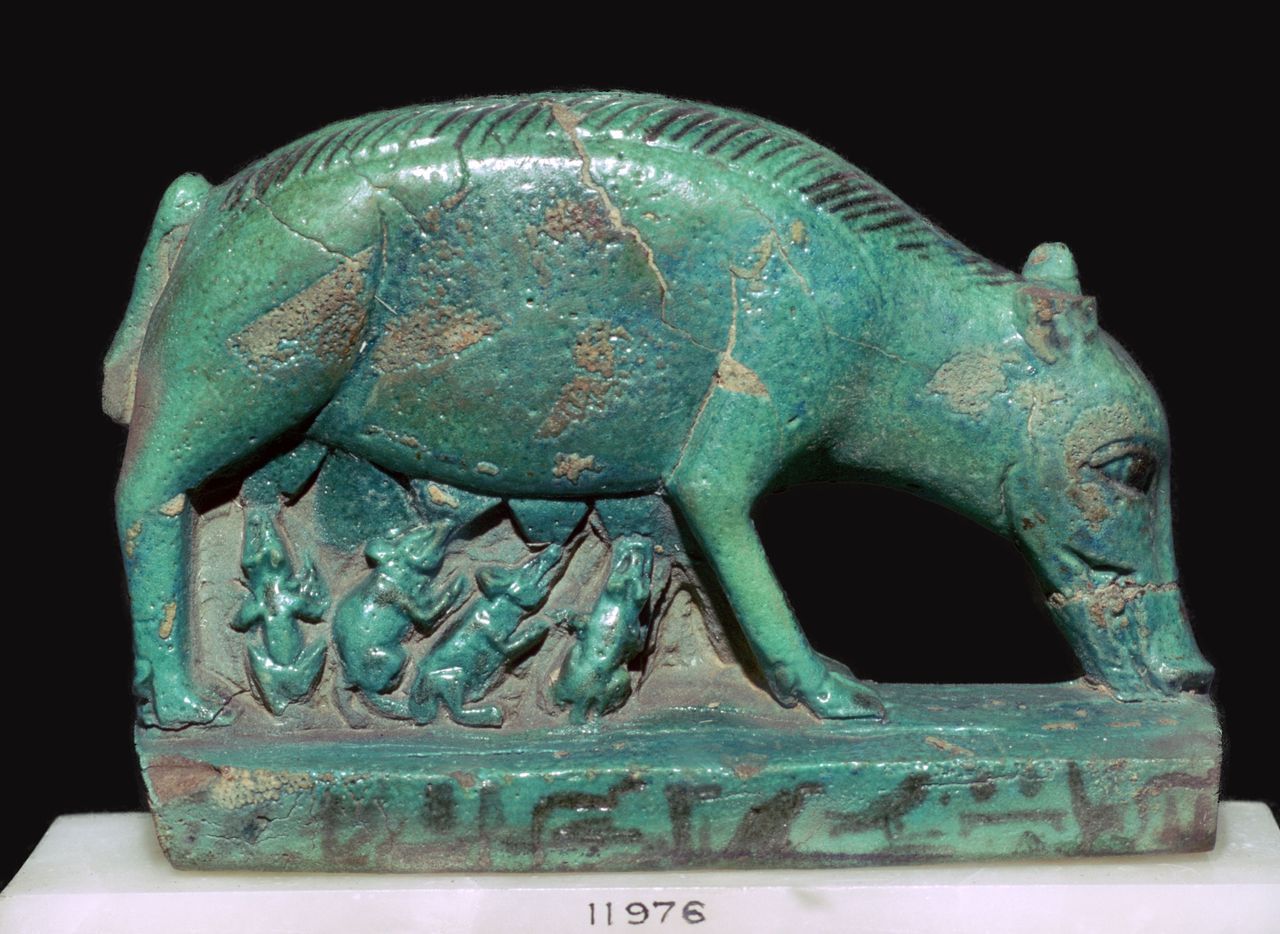 I just wanted to give some perspective in the introduction above. For now Transhumanism is being forced upon humankind – but they have ALWAYS BEEN HYBRIDIZING US. If you keep that in mind and read the Old Testament you will see why we need a saviour with new eyes wide open. 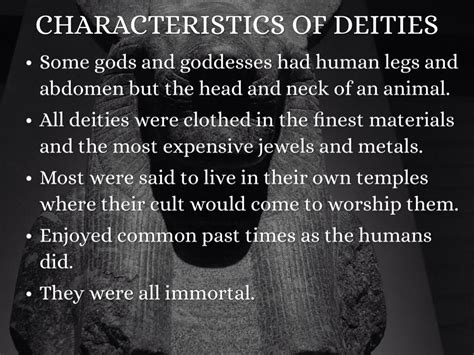 Cymatic illusion provides what is perceived by the senses of the body. The touchless torture of 5G and HAARP is far more sophisticated that the enormous flat rock Satan threw upon Adam and Eve, which Jehovah suspended and made into a shed to protect them, or the Skynet and Fowler’s Snare summoned by the Egyptian thaumaturgist and the Hebrew priests.

Cymatic illusion provides what is perceived by the senses of the body. The touchless torture of 5G and HAARP is far more sophisticated that the enormous flat rock Satan threw upon Adam and Eve, which Jehovah suspended and made into a shed to protect them, or the Skynet and Fowler’s Snare summoned by the Egyptian thaumaturgist and the Hebrew priests. Piecing this lineage of lies into the facts behind them is so shocking that one can’t unsee it, as they say. Why were pigs a sacred animal to the Egyptians? And now they have been discovered as venerated beings in 50,000 to 80,000 Sulawesi caves. 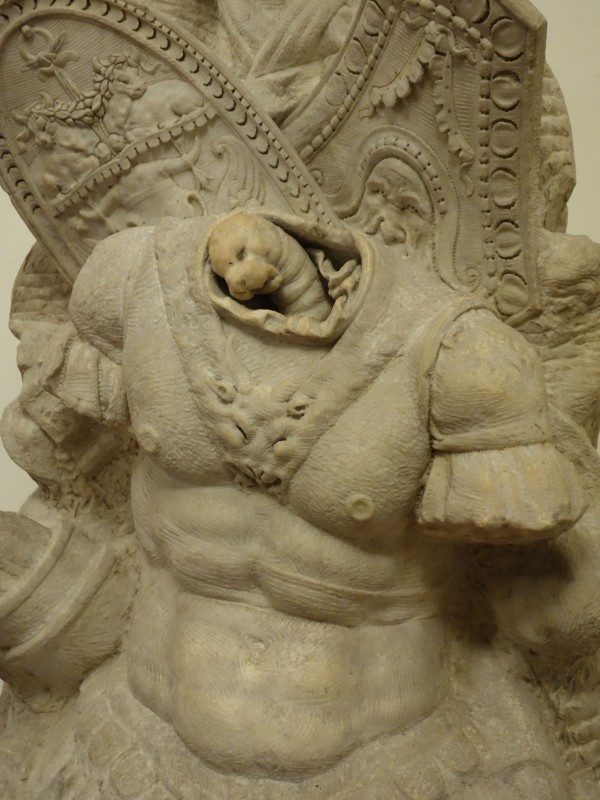 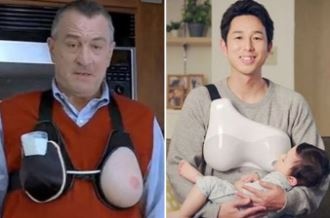 Here is a hint: who could bear to look at these monsters who forced good-natured, loving, creative and heart-filled human beings to work unto their death like expendable things building the pyramids, and being used as blood products for the Dendera Lightbulbs and cement and as food for the alien gods? 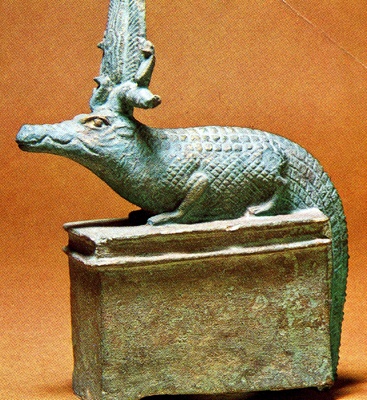 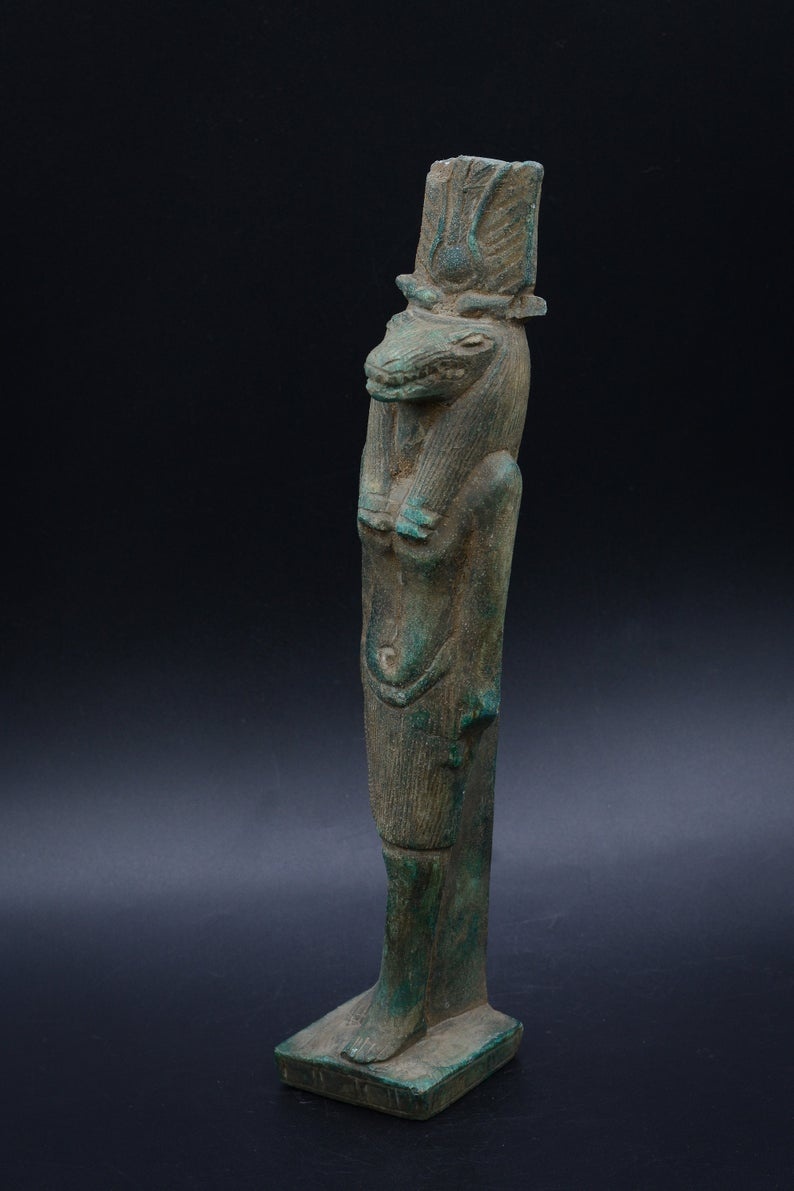 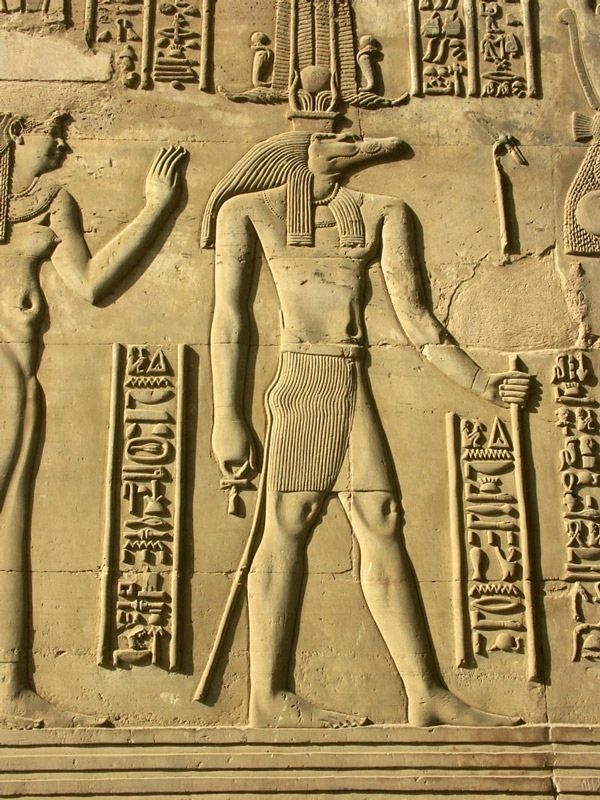 The snake-headed Mesopotamian diety was Basmu, also called Marduk who is known as the son of Sophia who struck his mother in half with his club. She is Tiamat and half of her became earth, with her blood being gold, and he was cast to off in an elliptical orbit: Nibiru. This is why all across the earth there are monolothic places to chart the cosmological bodies and stars so that they could open portals for this reprobate’s return. HE, LUCIFER, SEEDED EARTH WITH HIS VIRUS RNA, AND IS THE PARASITE OF ALL PARASITES. 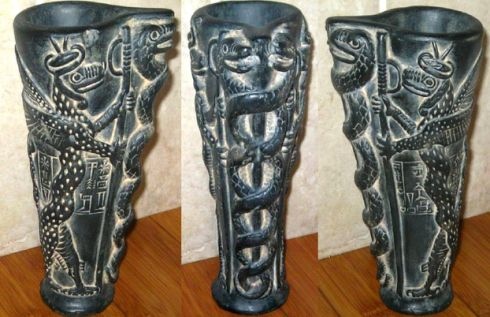 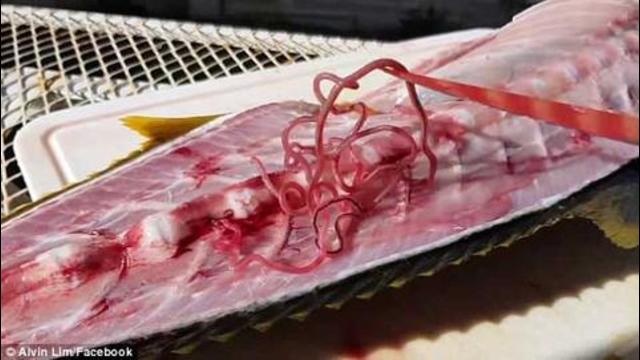 Look at these worms from a piece of pork!

So all that said, PORK IS THE REPTILIAN FOOD, because it directly affects the physical body’s frequency. It raises their frequency and it lowers ours. Pork really is the other white meat, our flesh being the original.

The pigs that were kept were half-human and half wild boar: hybrids. Eating pork therefore is cannibalism. Pigs lack lymphatic systems, and store toxins all their lives because they do not have a liver. The reason that they are so intelligent, and can be used medically for skin grafts, cloning, is because they are 50% (more or less) human. If you ever see older, full grown hogs, and get to interact with them, you can immediately – YOU CAN’T UNSEE IT – recognize the human skeleton beneath their mature flesh and carriage, and how they listen intently, and obviously are communicating, but their vocal cords can’t make our words.

This is why YHWH forbade the eating of pork. He really intended for us all to be vegan, but in His Mercy COMPROMISED with the now-miscegenated people who had polluted genes because they gave in to fornication and living with aliens – the reptilian fallen angels, and the nephilim (bet you were wondering when I would use that word!).

So the eating of pork acts to:

1. Raise the frequency of the reptilians

2. Lower the frequency of humans

This causes a “middle ground” of sensory perception.

Not only that, it causes demonic possession.

“There on the nearby hillside a large herd of pigs was feeding. So the demons begged Jesus, “Send us to the pigs, so that we may enter them.” He gave them permission, and the unclean spirits came out and went into the pigs, and the herd of about two thousand rushed down the steep bank into the sea and drowned in the water.” – Mark 5:11-13 (Berean Standard)

This is a wild boar: 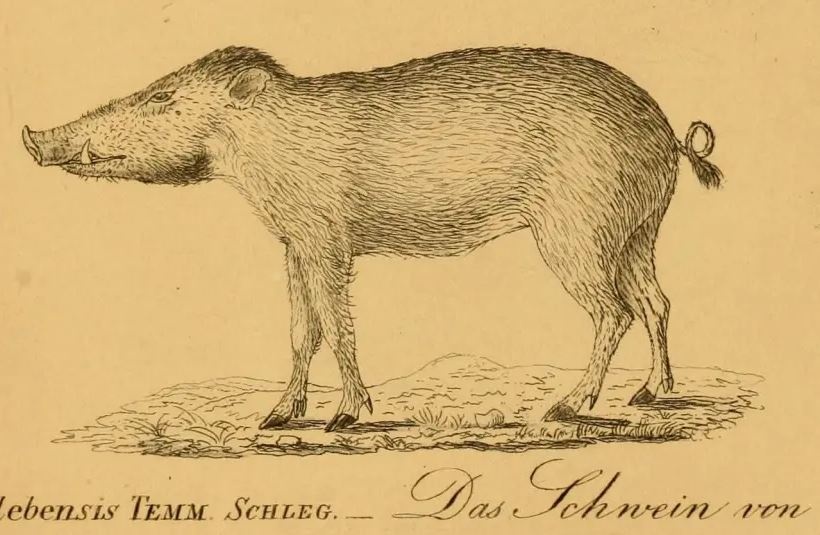 Even the native Hawaiians I knew when I lived there know all that I am telling you about pig being half-human, half wild boar is true.

After the railways system was completed the Luciferians contaminated the Chicago feedlot pigs with trichinosis and used the railway system to infest all of America with it, made worse by the telegraph lines and electrical line frequencies.

Once humanity was sufficiently dumbed down, the Jewish Zionists could institute this plan: 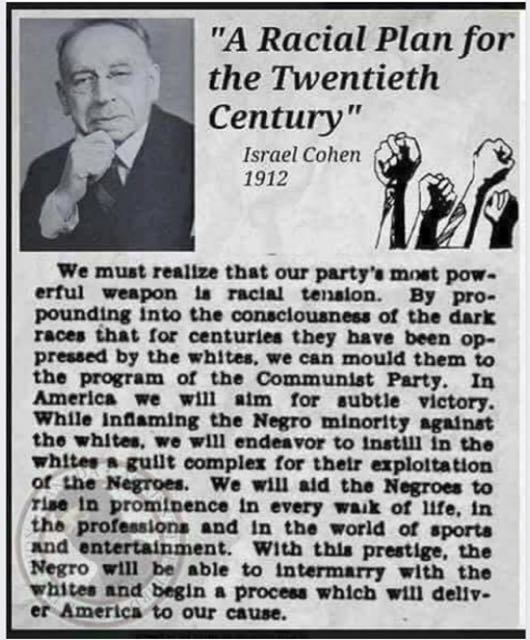 Here are the Sulawesi cave paintings: 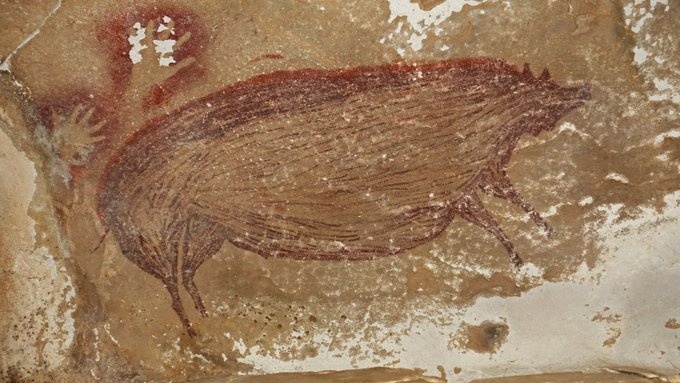 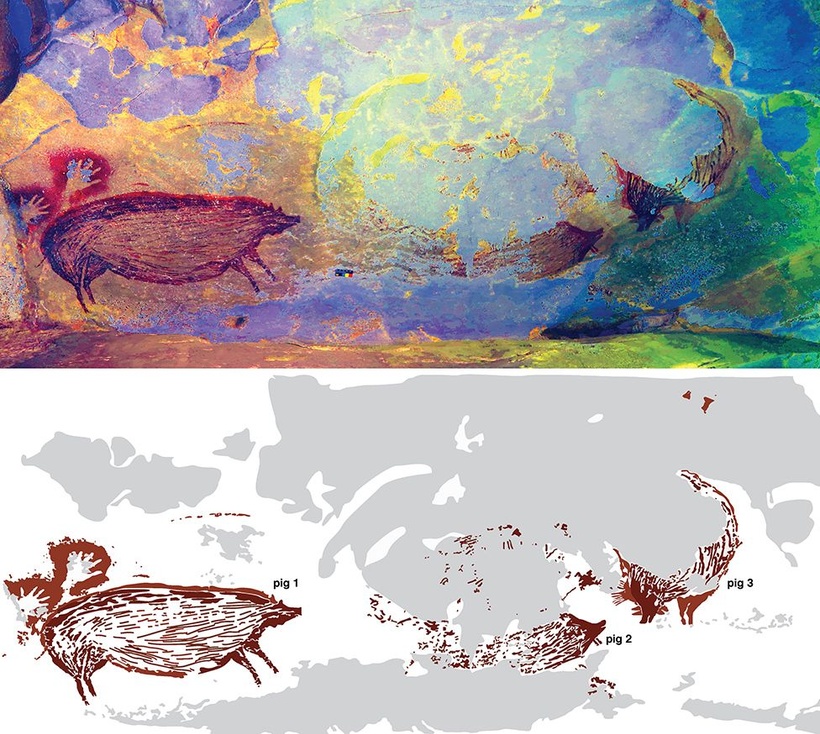 What more fitting place to publish this than https://www.jpost.com/israel-news/culture/cave-painting-of-a-wild-pig-might-be-oldest-art-in-the-world-655708

The more I decipher, the more excited I am that as Believers, we are not apportioned to wrath but will be JAILBROKE from this coming seven years of Hell on earth Tribulation. I am overjoyed that this earth will be cleansed with fire all of the RNA, toxins, spike proteins and nanotechnology will be destroyed as the sky rolls together like a scroll closing up and all of the earth elements melt! And our mortal bodies with FAITH IN THE LIGHT THAT IS JESUS CHRIST will translate to purity of truth and love! Knowing this fuels my days. I regret all the years eating pork growing up, and feeding it to my children, and unknowingly passing them over the fire to Molech. This is why the Most High GOD is merciful and loves us so much that He came to earth in the form of His Son, to teach us how to detox. Because, really, why eat your brothers? Eating pork is cannibalism. That’s why YHWH gave strict food laws against it.

And the black magicians of Satan who have the gall to call themselves “Jews” are hiding God’s prophecy The End Times with the ‘4th Industrial Revolution, The Great Reset RAPTURE Cover-up‘. 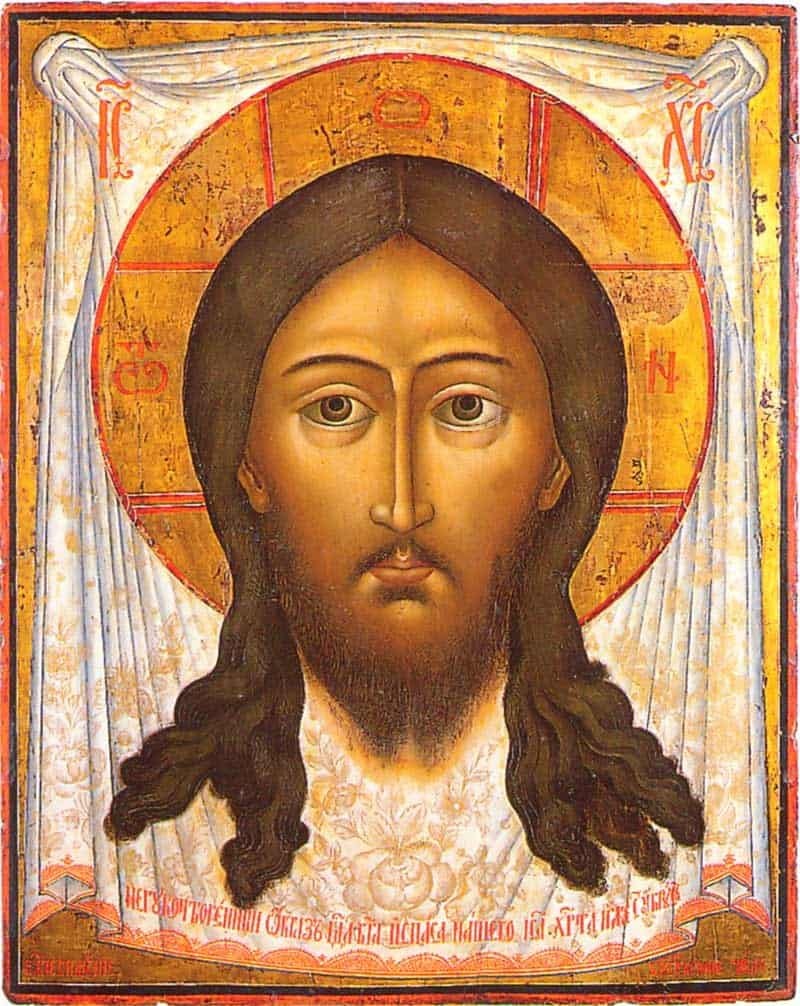 WE ARE THE LEVITES, WE ARE THE CHILDREN OF THE LIGHT, beloved!

The owner of this site waives her right to be recognized as a Person (or PERSON) before the law (Article 6, Universal Declaration of Human Rights; Article 16, International Covenant on Civil and Political Rights)