MAKE THE MEN SIT DOWN – A study from leftovers for the End Times and the Left Behind
December 2, 2022
(And of course if I have made text blue, that’s a link to follow.)

It was a young child (read here to learn why we should never call children ‘kids’), a boy, who gave the apostles the basket of five loaves and two fish, which were used to feed 5,000 men and their families with them:
After these things Jesus went over the sea of Galilee, which is that of Tiberias. And a great multitude followed him, because they saw the miracles which he did on them that were diseased. Jesus therefore went up into a mountain: and there he sat with his disciples. Now the pasch, the festival day of the Jews, was near at hand. When Jesus therefore had lifted up his eyes and seen that a very great multitude cometh to him, he said to Philip: Whence shall we buy bread, that these may eat? And this he said to try him: for he himself knew what he would do. Philip answered him: Two hundred pennyworth of bread is not sufficient for them that every one may take a little. One of his disciples, Andrew, the brother of Simon Peter, saith to him: There is a boy here that hath five barley loaves and two fishes. But what are these among so many? Then Jesus said: Make the men sit down. Now, there was much grass in the place. The men therefore sat down, in number about five thousand. And Jesus took the loaves: and when he had given thanks, he distributed to them that were set down. In like manner also of the fishes, as much as they would. And when they were filled, he said to his disciples: gather up the fragments that remain, lest they be lost. They gathered up therefore and filled twelve baskets with the fragments of the five barley loaves which remained over and above to them that had eaten. Now those men, when they had seen what a miracle Jesus had done, said: This is of a truth the prophet that is to come into the world.
John 6:1-14, Douay-Rheims (emphasis added) 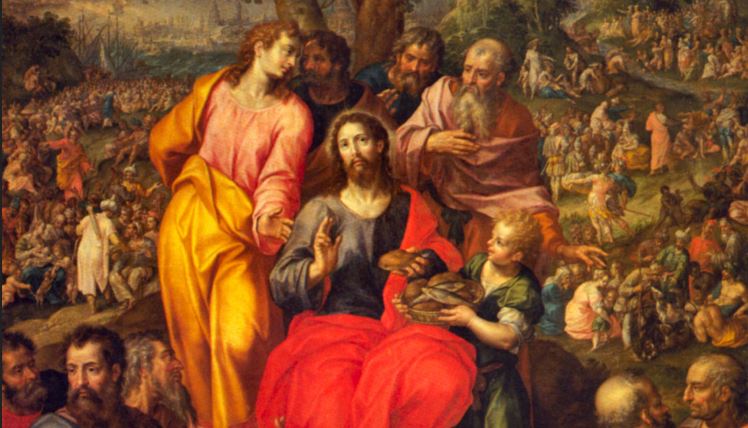 The young child had no inhibition that giving his family’s food would be insufficient. Like how only physicists and young children can readily grasp bilocality (being in more than one place at one time, the property of the Higg’s-Bosun God Particle which mixed state quantum physics imitates), the child saw not that what he had to give was futile or useless! He gave all he had, his inner light being less dimmed due to innocence – and that’s what we are to do.

The controllers say to us: “FOLLOW THE SCIENCE”. Alright, let’s go!

Science has shown us that the Higgs-Bosun subatomic particle – called THE GOD PARTICLE, and for good reason – appears in 1 out of every 1,000 people, approximately. It was the Higgs-Bosun particle which reordered every cell and atom in Jesus Christ’s body and resurrected it instantaneously (read THE SCIENCE OF OUR RAPTURE), as determined by the studies conducted on his burial cloth (the “first selfie”) the Shroud of Turin.

Babies are born, more or less, nearly (but not completely) blank slates, and depending on their genetic persuation and congential, development and environmental parasite load, become pressed to give in to the third strand RNA entwined between the DNA. It’s a sin load carried in all of us from The Fall when Lucifer’s reptilian RNA poisoned our Light race. And some ‘people’ (a term transhumanism, including those affected by the jab program, makes us have to use with many qualifiers now) have more RNA than others. Alien blood, or strangers, as the bible calls them. There are lots of bits of evidence that these fallen races walk amongst us now:

And so they want to add 666 to our DNA signature. This is called The Mark of the Beast, and is being done with the gene editing the entire world will be mandated to receive upon pain of death for refusal which will be in full enforcement after the Rapture occurs. Use of smart devices and apps and wearable biometric data trackers will be used to control what one will be allowed to do, eat, travel, work and ultimately how long one will live.

Why? Because THEY HAVE NO LIGHT AT ALL and they want to snuff out human lights once they have performed the work function and given them the products they want.

I don’t normally recommend things by the counter-intel controlled opposition Thrivetime Show, but this is worth watching for those who are unaware of the reason for what Jesus said in Matthew 24:22 “And except the Lord had shortened the days, no flesh would have been saved: but for the elect’s sake, whom he chose, he shortened the days.”:

So hang onto that light you were given when you were conceived. It will become easier if you detox: I can help, here is the link to my books and it opens in a new tab: https://www.amazon.com/Laura-Rohrer-Little-Brooks/e/B096LG6H8L

Why is it easier? Well, in the Essene Gospels of Peace, hidden from humanity by the Romans who became the Catholic Church, JESUS CHRIST HIMSELF TAUGHT US HOW TO REMOVE PARASITES FROM OUR BODIES. But that truth – and THE RAPTURE – was and still is HIDDEN FROM HUMANITY.

Look at the image below: that little child is YOU. YOU ARE ALREADY A GREAT BEING OF LIGHT IF YOU ACCEPT JESUS CHRIST AS YOUR SAVIOUR. He alone is the door, the way, the truth, and the light. There never was religion: those are deceiving narratives.
Be the child who offered all he had to feed the multitude.
Spill yourself out and give your all to God.
The RNA in your genome is sin – they made a business of it. Jesus gave his Higgs-Bosun blood once and for all and it is to save all who ask. This is the “Born Again”: not myth or allegory, but SCIENCE FACT.
*https://eatingtoascend.com/2022/03/31/deliver-us-from-gain-of-function/

It’s time to destroy the ages of lies: THE ASCENSION DIET – EATING TO ASCEND Alkaline Diet and Optimal Health in an EMF Nano Toxic World book waits for you