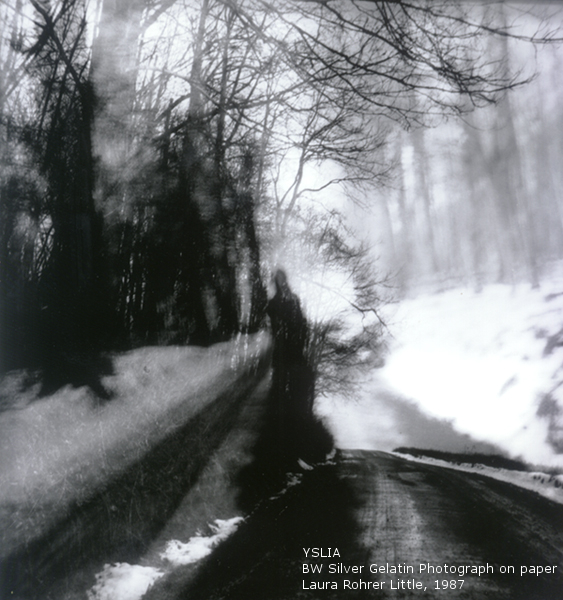 It’s been raining for days
& there’s piles of soggy newsprint
outside my front door
in a mess of time
I’m beginning to think
it might never stop
Spiders sought higher ground
in my bed last night
& I had weird spectral dream visions
of an anti-mystical world
ruled by a bored and furious devil
who had finally usurped the throne of God
but still wanted more.
I woke up with pain in my guts
& pale excuses for breathing
I fumbled through the disordered day
until you appeared
running through the dripping trees
in the last flashes of filtered light
with the crown of evening in your hair
saying – LOVE IT ALL
LOVE IT ALL
LOVE IT ALL
& suddenly
somehow
I did.

– Ed Bavis, poem I cut from the Baltimore SUNpaper in 1975
Photo I did of two sandwiched negative, February 1987 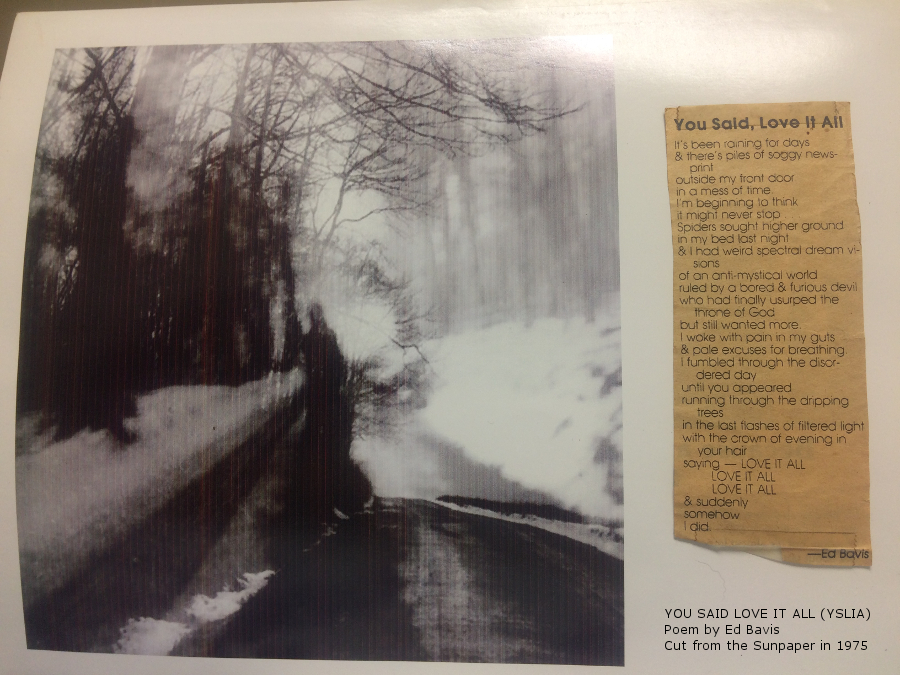 I took these photographs, sandwiched them together and printed them in the Black and White darkroom (which I ran, as a photography student there, often with my son Max carried on my left hip as I worked) at University of Maryland Baltimore County (UMBC) in Catonsville, Maryland, my home town. As a young girl, I as a voracious reader, and we got the Baltimore Sun newspaper delivered daily for all the years I lived there, until one week before I turned 18, when I moved out, unwilling to continue being abused by my mother.

I cut the poem out of the SUNDAY MAGAZINE section when I was 15 years old, in 1975, and saved it. Later, when I did the image I call YSLIA, I remembered the poem and coupled it to the image. It is a foreshadowing of the Rapture – The Creator’s Harvest of Souls before the world enters Tribulation.

I have always been a Seer, one who dreams dreams and has visions. For this, and what I was destined to do in the Last Days according to the Will of God, I have been targeted by MK Ultra and shunned. Lyme disease is real, and Morgellons Syndrome is too: the rejection of the Transhumanism in the body, now the Trojan Horse forced on mankind in the name of Covid-19: The Mark of the Beast.

“Most Jews do not like to admit it, but our god is Lucifer.” ~ Harold Wallace Rosenthal
https://thetruthisfreedom.wordpress.com/2010/06/27/jews-worship-and-adore-satan/

The Protocols of The Learned Elders of Zion
https://campbellmgold.co.uk/archive_esoteric/protocols_of_zion.pdf

“Our race is the Master Race. We Jews are divine gods on this planet. We are as different from the inferior races as they are from insects. In fact, compared to our race, other races are beasts and animals, cattle at best. Other races are considered as human excrement. Our destiny is to rule over the inferior races. Our earthly kingdom will be ruled by our leader with a rod of iron. The masses will lick our feet and serve us as our slaves.” Prime Minister of Israel, Menachim Begin (left), in a speech to the Knesset, quoted in Amnon Kapeliouk, ‘Begin and the “Beasts”, New Statesman, 25 June 1982.

Earth is FLAT,
NASA in Hebrew means to ‘DECEIVE’.
aliens are demons.

Do Not fall for alien deception.

If you lose cell phone reception turning a corner, how could you believe that nasa can control toys millions of miles away on an imaginary planet that is nothing more than a wandering star?

200 Proofs Earth is Not a Spinning Ball by Eric Dubay
https://youtu.be/1oBc8qrQutE

Here is an actual video of the wandering star Mars = Not a planet = Earth is the only planet & Humans Are SPECIAL.

A chilly evening with the “Red Planet”
https://youtu.be/5xoFQhJv_1E

200 Proofs Earth is Not a Spinning Ball by Eric Dubay
https://youtu.be/1oBc8qrQutE

ANOTHER popular Orthodox rabbi demands our DEATH for sharing the gospel in Israel!
https://youtu.be/IfBWZG3uvuc

Nazis are NOT only German but have existed in all Western countries from the beginning.

Members of the Jeffrey Epstein ‘we are all in this together’ pedophile planned-demic worldstage performers.

Everyone on the world stage, your televisions & all screens is a satanic ACTOR always acting.

Toxemia – The One True Disease http://4livefoodfactorfriends.com/no55TZ6/DOC8-4.pdf

Dozens of Doctors-Scientists say Pandemic is FAKE, Virus is FAKE and the VACCINE will HURT or KILL You
https://brandnewtube.com/v/6NIXuf

Eugenics in the United States
https://en.wikipedia.org/wiki/Eugenics_in_the_United_States

The US has a history of testing biological weapons on the public – were infected ticks used too?
https://theconversation.com/the-us-has-a-history-of-testing-biological-weapons-on-the-public-were-infected-ticks-used-too-120638

How the U.S. Government Exposed Thousands of Americans to Lethal Bacteria to Test Biological Warfare
https://www.democracynow.org/2005/7/13/how_the_u_s_government_exposed

Top 10 US Government Experiments Done On Its Own Citizens
https://listverse.com/2017/06/01/top-10-us-government-experiments-done-on-its-own-citizens/

The 13 Most Evil US Government Human Experiments
https://wariscrime.com/new/the-13-most-evil-us-government-human-experiments/

Just how did the cameramen get to the Moon before the ‘actor-nots’, in order to film the capsule secured with aluminum foil, cardboard & masking tape pretend to land on the Moon ?

Von Braun died on 16 June 1977 of pancreatic cancer in Alexandria, Virginia at age 65.

He is buried at the Ivy Hill Cemetery. His gravestone cites Psalm 19:1:

“The heavens declare the glory of God; and the firmament sheweth his handywork” (KJV)

“FIRMAMENT” in the KJV Bible
https://www.kingjamesbibleonline.org/firmament/

Vaccines in the future contagious https://whoa.popsci.com/vaccines-of-the-future-could-be-as-contagious-as-viruses/

New ATMs made in China – https://www.youtube.com/watch?v=Hc__j8TXKo0

“Self-spreading vaccines could potentially be used to broadly inoculate human populations. Like the approach in animals, only a small number of vaccinated individuals would be required in order to confer protection to a larger susceptible pupulation, thus eliminating the need for mass vaccination operations, including PODs (Points of dispensing (POD) are community locations at which state and local agencies dispense and administer medical countermeasures (MCMs) to the public.)”

“Alas! It is delusion all;
The future cheats us from afar,
Nor can we be what we recall,
Nor dare we think on what we are.” – Lord Byron, “Stanzas for Music”