Shared  June 29, 2021 on https://www.patreon.com/posts/53111522
Addendum added on January 12, 2021
Invited to “take a survey” about my “participation” in “The Great Shakeout”, I was not allowed to access the survey at all, and experienced DDoD attacks, and was forced to reset my VPN and computer. I responsed to them with this email, a reply to their survey invitation: 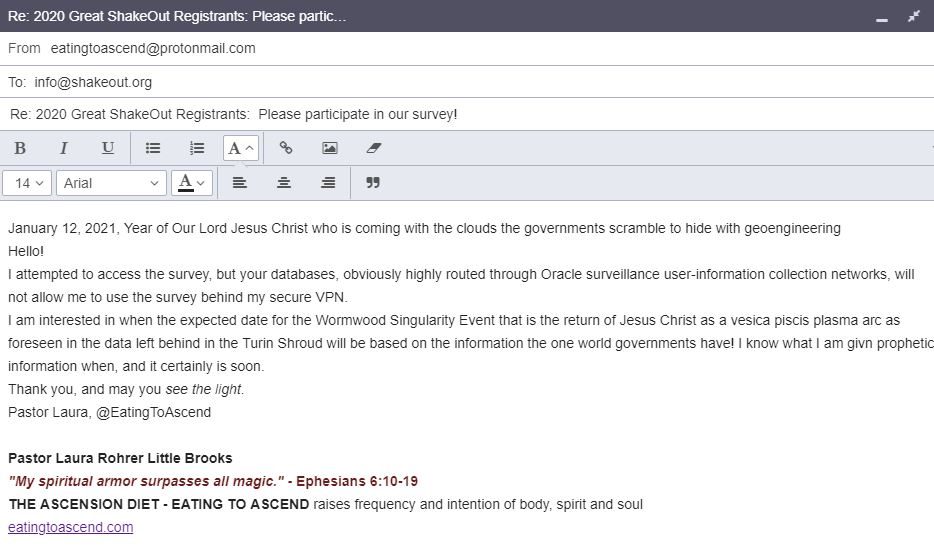 On October 15, 2020 – in just two days – there will be a nation-wide earthquake drill called THE GREAT SHAKEOUT OF 2020. Are you aware of this? The program was begun in 2008 in California, but is now in the majority of the United States. Here on the east coast of America’s East Coast, they are preparing not only for earthquakes, but for tsunamis and flooding. Click HERE for the Southeast portion of the site

A year ago, I posted HEY VIRGINIA, did you read that?

I registered as a faith-based group to attend this SHELTER IN PLACE LIVE EXERCISE… that no one seems to know takes place annually now… GO FIGURE! There were many signs and portents leading up to the 9-11 #TwinTowerSoulSacrifice which ushered in the era we live in now of complete surveillance in which human beings themselves are defined and hunted down as the terrorists sought after by the military and arms of the deep state.
(The entire twin tower sacrifice concept has its inception in the fallen brother dieties Enki and Enlil and is one of the first acts of sorcery used to derive power from the harvesting of trauma. Twinning is unnatural and only occurs from the RNA contribution of the conception. This is why Mengele studied it, as part of trying to clone the ‘master race”, the Aryan Vril, Thoth, et cetera. The search for the third strand on demand, not random. Satan, as the first narcissist, is never satisfied, and must always look a his own image and always have his ‘supply’).

You can even get Shakeout merch! Look, a plate tectonics puzzlemap! 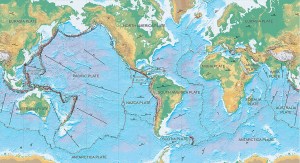 The other night I came into the research’ corral’ (if it were the actors Paul Thomas Anderson uses, I would call this “a stable”) of what is known – since time immemorial, which means “before recorded history” – of what is known as THE IMPERIAL CULT.

My followers – especially self-described as HINDU – are shocked to be told that  they get their supposed information from and actually worship agents of Lucifer, Satan, Sobek. the devil. Nebro. Sama’el, call it what you will. Narratives have been fabricated since The Fall.
I don’t even like typing ‘”The Fall” due to the fact that truth has been so distorted by the narratives, nested lies going so far back we can’t root out truth without clairvoyance, which is why the governments employ psychics/remote viewers. (And also why the CIA tried to hire me while I was still in 12th grade. This is the basis of my ability to restore truth from the scattered, disparate parts, and I don’t usually try to find it: it finds me, and this heightened cognition is what I hope helps others to cast off those last veils.)

It’s all the error of Sophia Pistis, who, redeemed by The Creator, was given a role as Tiamat in The Purifier, the system ‘over’ us, what they attempt to hide with their so-called “climate control” geoengineering. And this evening, ‘she’ appeared in the sky over the horizon in a position displaced northward in the same relationship alignment with the ‘sunrise’ two days ago.

If I were publishing utter nonsense, I wouldn’t get so hacked, and this website would have more visibility. I realize that sometimes I say things that are controversial, and seem harsh. It’s difficult to balance how much to convey with the ability of any audience member to listen and accept. Especially when basically it seems that the message attacks paradigms that have been in place for thousands of years and practiced by untold billions of people. If I offended you, I apologize. And it’s not about one religion or another, any religion. Religion is a construct, religions are narratives, in the same vein the hoax affecting everyone now is a contrived narrative.

After transcribing the finding of the Ark of the Covenant and also the process by which Yeshua’s blood sample obtained from the Mercy Seat was cultured, proving that the maternal contribution was 23 chromosomes, and the paternal was one, the Y, to be used in a certain context in a certain chapter, I wanted to relax awhile and just read “freestyle”: whatever interested me, without a goal. On a lark I searched ‘why was Jesus a threat to the Roman government’, and the search result was like when someone asked “Alexa, what is a chemtrail?” and got a straight answer! “Chemtrails left by aircrafts are actually chemical or biological agents deliberately sprayed at high altitudes for a purpose undisclosed to the general public by government officials.” (It is not surprising that the PTB have censored Alexa since that truthbomb.) Then I came upon the term IMPERIAL CULT, yet another piece fell right into place. Words in sky blue are especially telling…

“The Imperial cult of ancient Rome identified emperors and some members of their families with the divinely sanctioned authority of the Roman State. The framework for Imperial cult was formulated during the early Principate of Augustus, and was rapidly established throughout the Empire and its provinces, with marked local variations in its reception and expression. Augustus’ reforms transformed Rome’s Republican system of government to a de facto monarchy, couched in traditional Roman practices and Republican values. The princeps (later known as Emperor) was expected to balance the interests of the Roman military, senate and people, and to maintain peace, security and prosperity throughout an ethnically diverse empire. The official offer of cultus to a living emperor acknowledged his office and rule as divinely approved and constitutional: his Principate should therefore demonstrate pious respect for traditional Republican deities and mores. A deceased Emperor held worthy of the honour could be voted a state divinity (divus, plural divi) by the Senate and elevated as such in an act of apotheosis. The granting of apotheosis served religious, political and moral judgment on Imperial rulers and allowed living Emperors to associate themselves with a well-regarded lineage of Imperial divi from which unpopular or unworthy predecessors were excluded. … The Imperial cult was inseparable from that of Rome’s official deities, whose cult was essential to Rome’s survival and whose neglect was therefore treasonous. Traditional cult was a focus of Imperial revivalist legislation under Decius and Diocletian. Christian apologists and martyrologists saw the cult of the Emperor as a particularly offensive instrument of “pagan” impiety and persecution. It therefore became a focus of theological and political debate during the ascendancy of Christianity under Constantine I. The emperor Julian failed to reverse the declining support for Rome’s official religious practices: Theodosius I adopted Christianity as Rome’s State religion. Rome’s traditional gods and “Imperial cult” were officially abandoned. However, many of the rites, practices and status distinctions that characterised the cult to emperors were perpetuated in the theology and politics of the Christianized Empire. The Roman Imperial cult is sometimes considered a deviation from Rome’s traditional Republican values, a religiously insincere cult of personality which served Imperial propaganda.” (Wikipedia)
(Note that the Hindu word for god/dess ‘devi’ derives from the Greco-Roman divus, divi) 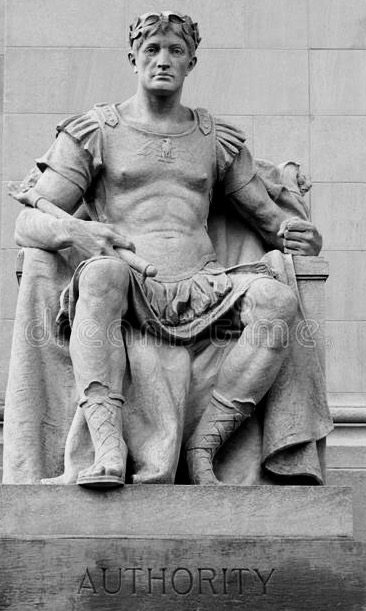 Now recall what Derek Prince and Paul in Ephesians 6:10-18 each explained about the workings of Satan’s Kingdom. Ethnically diverse due to each nation being offspring of the mating of a different fallen angel with a human woman. It was the “divinely sanctioned authority of the Roman State” because Satan is the Prince of Darkness, and this 3D manifested meatsuit world of illusion is where we exist to refine our dross – or not – and ascend/transcend/translate. Those little-g gods walked the earth, we see the remains of their architecture and their bones found. I could tease out each point, but you get the idea. 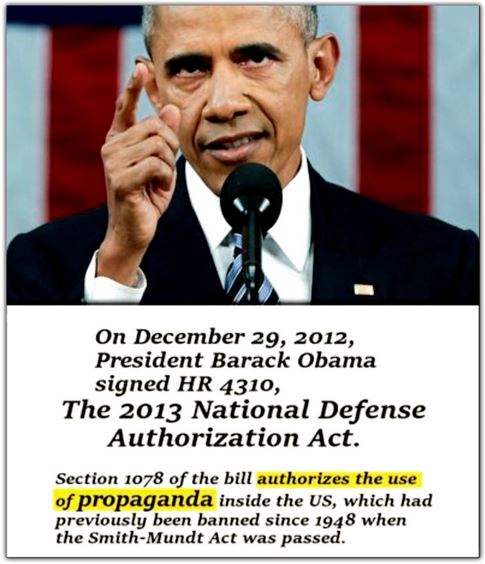 So why was the worship of Jesus such a threat to Rome? Because it wasn’t really the jews at that point: they already had murdered their Messiah. Jesus was a threat because he destroyed their narrative, the same as anyone who goes against any of their narratives now. The Kingdom of Heaven is in each of us as Children of the Light. GOD – the Most High Creator – is The Law. What is that? It is LOVE, LIGHT AND CREATION ITSELF. It is the Fibonacci and Pi. It is boundless, ‘He’ is indescribable and illimitable. How could they maintain authority if all they are is a tiny, hook-like parsite hitchhiking in between our chromosomes, instilling fearbased trauma to harvest our light because they have none?

You’ll never get this from a bible.

That’s why they’re rather have everybody focusing on Amazon Prime Day and using ZOOM than preparing to meet their maker. They have been hiding this event since before “The Fall”.

@EatingToAscend BLOCKED from PayPal in 2019, and on October 23, 2020 was SUSPENDED ON TWITTER, so please share my posts!

Unauthorized use and/or duplication of this material without express and written permission from this blog’s author and/or owner is strictly prohibited. Excerpts and links may be used, provided that full and clear credit is given to Pastor Laura Rohrer Little Brooks and The Ascension Diet – Eating To Ascend with appropriate and specific direction to the original content.