“Now I shall tell you about discrimination between self and non-
self. Listen and keep it firmly in mind. Of these two, I shall speak
first about the non-self. 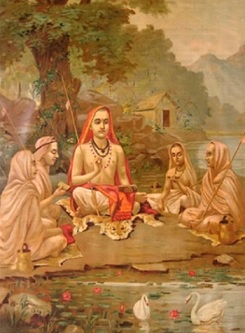 The brain, bones, fat, flesh, blood, skin and bodily fluids are the seven
factors that constitute the gross body. So say those who know. The feet,
thighs, chest, shoulders, back, head, et cetera, are its members. People
regard it as I, owing to the mind’s attachment to it. It is the primary
attraction to all, and the most obvious. It is made up of ether, air,
fire, water and earth, which, as the subtle essences, form sense objects
into groups of five, such as sound, sight, taste, touch and smell. The
ego, being intent on pleasure, regards these as means of enjoyment.
Foolish and ignorant persons are bound to sense objects by the rope of
desire, attracted according to the power of their karma, which leads them
up and down and causes them to wander in distress. The serpent, Indira,
died through attachment to sound. The elephant, through attachment to
touch. The fish, through attachment to taste. And the bee, through
attachment to smell. If these die through attachment to a single sense,
what must be the fate of humans, who are attached to all five?” – Vivekachudamani Part I – Shankarachaya, Advaita

All that is perceived by the senses which the mind bases reality upon is CYMATICS.
See also “Secrets of Cymatics, DNA, and Egyptians”

There is an Indian parable called The Rope and the Snake. A man walks along a path at night, and sees a poisonous snake on the path in front of him. He turns and runs in the opposite direction. The next morning he resumes his journey and he finds a coiled rope on the ground at the spot he had turned back from in fear for his life. He realizes that in the darkness, he mistook the coiled rope as a snake and he realizes that in darkness it is hard to see reality as it truly is. In the light of day, he was able to see clearly. The snake is the human ego, which controls a person through the perception of illusory phenomena and fear. Our perception of reality can be clouded by darkness, which is ignorance to reality. This ignorance sometimes manifests as rapid judgment or fear, and we react solely based on senses or emotions. Living a life based upon intellectual decisions made in reaction to what one perceives is seeing the snake. Meditition is the key to release from this mental gymnastic which imprisons the mind bound by a body reacting to its senses. Very few people will get this memo genetically.

There is another level to this, and that is the purpose of the human ropeworm in the body, the serpent in the gut. Jesus Christ as the Most High Living God in human form taught his disciples and followers to fast and pray (meditate) a day for every year they had been born into the body, and to use the trailing vine attached to an elevated large gourd to perform enemas daily, drinking only water and doing this until all that flushed out of their bowels was as clear as water. This is what is recorded in The Essene Gospels of Peace which the newly created Roman Catholic Church hid from humanity.

When the Dead Sea Scrolls were discovered in 1948 and the cache of ancient manuscripts was translated, the Essene Gospels were read. In the 1960’s, a scholar given permission to look through the basement of the Vatican Library on an entirely different subject found the copy of the Essene Gospels that the catholic church had hidden from humanity in order to control human beings by not allowing them to know the truth of how to remove the human ropeworm serpent in the gut and free themselves from their enslavement to the senses and the blinding effect of the toxins and demonic power to affect and control thoughts and emotions this ropeworm has. It was no accident this researcher ‘accidentally’ found the Essene Gospels of Peace. The age we are in prophecied that in the last days, truths long hidden would be revealed. This is the final Kali Yuga as prophecied.

People ask why there are mosquitos, roaches, ticks, fleas and parasites, which exist only to plague humanity.

The ropeworm should be number one on that list, but then if truth had not been hidden from us, the entire human story on earth would be a completely different one, and we would be living in Peace! Those who manage to remove this internal ropeworm snake embodiment of Lucifer and his many smaller offspring minions attest to their clarity of vision and inability to harm others. They are the extreme empaths of this world, absorbing pain and living in LOVE and service to all with no attachment to earning money in a plotted-out financial plan. They serve.

Detoxing the ropeworm removes the scales from the eyes, and the path of the seeker of truth is enlightened. This is why truthseekers renounce the world, fast and meditate. The detachment from this play of life is necessary, and my readers have read ad infinitum the extent to which this goal is a part of my life, as the controllers failed to destroy me with MKUltra, and dross burned off in exquisite refinement. It is my hope that at least one person gets this message.

“Therefore if you really want liberation, cast away the pleasure of sense
objects as though they were poison. Hold firmly to the virtues of
contentment, compassion, foregiveness, sincerity, tranquility and self-
control. Give up all actions performed out of attachment to the body and
strive ceaselessly for liberation from the bondage caused by ignorance.
This body is finally consumed, whether by earth, fire, beasts or birds.
One who, forgetting their real nature, mistakes this body for the self
gets attached to it and cherishes it, and by so doing, becomes the
murdere of the self.”

THE BODY KILLS THE SOUL.