For the next two days the Northern Lights – the Aurora Borealis – will be visible across all of Canada and as far south as San Franscisco, Denver, St. Louis and Washington D.C. This article posted by @StLHandyMan today confirmed what I had been suspecting, having learned to read the patterns and placement of the geoengineered cloud cover, the fabricated rains, the local power interruptions, the push in utility company pamphlets distributed with monthly bills warning its customers of outage preparation, power surges (they sell surge protection insurance now), lighting strikes, tornadoes, hurricanes and distaster preparedness. (This is only a shortlist!)

“A geomagnetic storm is sending the Northern Lights south over the next few days. Unfortunately, Mother Nature didn’t get the memo. The wondows to see the Northern Lights are right now through 10AM, which now it is too light to see. The next window will open on Thursday from 10AM to Friday morning at 1AM. This happens to be the same time when showers and storms are possible. So it is possible we could get a partial viewing Thursday night.
If you’re lucky enough for Mother Nature to cooperate, you will want to get away from the city and any light pollution.”

Two feet of snow forecast to fall in California, Minnesota and other states… tornadoes in Texas… #GEOSTORMS

So much to cover here. They are hiding the visual evidence of the PlanetX  / Nibiru / Wormwood / The Destroyer / Pluto system which is closer than it has been since the Great Flood of Noah occurred. The ultimate evil ‘benefit’ – for them, the elite who are descended from and clones of the fallen angel aliens – is to prevent humanity from seeing what is coming. I know this as truth: it’s written in all the ancient texts. The Vatican hid this truth in the process of editing and sanitizing the Holy Bible. Believers have been deceived. People are kept from knowing how close the Shift is, the pole shift, transcendance, Rapture. Entering another dimension. 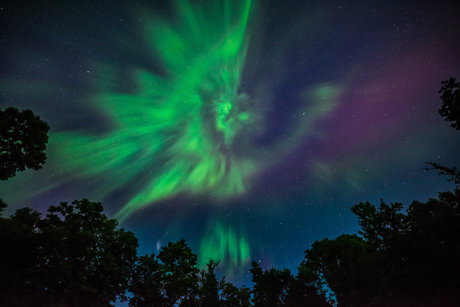 Cultures throughout TRUE HISTORY have varying stories describing what the Northern Lights mean. One thing they share is that these are human spirits seen as energy. If seen ‘below’ the equator (the Earth is flat) it’s red, not green, the Southern Lights, because they are spirits coming from the netherworld. From the north, green, the Aurora Borealis is attributed more positive spirit associations, including the concept of the soul’s spirit twin, which was a part of early Most High God faith of the pre-dynastic Egyptians. Seeing the Northern Lights is said to be looking at the countless ascended human spirits not in hold for hell, basically.

The rain and showers obscuring seeing this, and the late notice, are directly due to the weather manufactured to hid the close Nibiru system and the world-wide media coverup.

The skies are polluted with LED LiFi, which, like WiFi low electromagnetic frequency millimeter waves, is set to a pulse pattern for mind control. It reflects off the metallicized particulate-full “clouds” which are called “noctolumiescent”, and they obscure the ceaseless light in the sky from the incoming planetary system now. All part of keeping people facing the truth and eking out the last resources. We are their batteries as REM-Driven clones. They aim to keep as many souls trapped as possible.

Don’t fear. This what we have all been waiting for, and as it passes closer and closer, souls will be called. Some cannot stand The Purifier. It is remarkable to me, this verse:

Wherefore take unto you the whole armour of God, that ye may be able to withstand in the evil day, and having done all, to stand. – Ephesians 6:13

We are to stand. In the face of fear, and change, and threat, secure knowing that suffering on earth in this mortal body is the testing environment for our souls. I honestly believe that this is what was meant when we are told “having done all, to stand”.