In the post three days ago called BLESSED ARE THE TRUTHERS (Redpill singularity video), I shared COMING CATACLYSMS (PART 1) by Jon Keen’s THE BEST DAMN PODCAST. I hope readers have shared that with those they care about who are ‘on the fence’ or sleeping. I haven’t done that yet, save for here on this platform. What I have done, though, is take stock of the intensity of rejection, the sheer anathema people have to being dislodged from their cabal-induced consciousness coma. It’s especially disturbing to witness this in those who actually do obviously struggle morally and ethically with thier archons to the point where it’s so very clear that they have really, really good, well-meaning souls, and it’s not their fault they’re tragically deluded into reverie. have direct observations to share, more relevant to those who chose to view the video than to anyone who assumed its content/message and dismissed committing the hour+ to watch it. The obligatory purpose of extending this focus  bids me with no small implication, made obvious through interaction with those proximal verbally, alternating between empathy and apathy. It was the poster child evening of audience cognitive dissonance abetted by group confirmational bias versus what must be the most severe challenge a lightworker faces right now: to remain meek and act with love, not ego. The lesson to be learned in this is what must be shared, and after this post is completed, will added to the previous video: it’s that integral. We have sparse-to-nil training manuals for this age in which the Singularity is being hidden by the Strong Delusion, the plandemic, and the masses of humanity are unaware of what’s imminent, and will be taken unawares. People have the right to know what’s happening. It’s an extinction level event.

No wonder Yeshua, the Christ Jesus, warned us how hated, reviled and rejected we would be.

(An aside: is this part of why I have had to move so often over the years? But GOD always wanted his people to live in tents, not cities, a fact not taken note of those dictating worldly success).

The last seven years’ increasing confirmation of the TEOTWAKI I’d precogged at age nineteen truly has made me that lone wolf viewing the town from a distance. I don’t know who has my copy now, but in our early (married) twenties, Jamie came home from the Edmondson Flea Market with this print, and put it on the kitchen wall next to the stove. When I saw it after returning from my sunday afternoon organic chemistry study group, he told me he got it for me because “You’re like that lone wolf overlooking everyone you love and take care of”, my husband said. Even in 1984 (how prophetic), Jamie innately gnew the mindblowing realities on his deepest levels, articulated in his ways. He was set apart too, earlier than I was. In researching this print, I found this page and as happens constantly with my writing, see the Divine constantly at work, in control – it’s all GOD.

“I believe the lone wolf is a symbol of hope, the importance of that hope is one we all should solemnly try to comprehend.”

Longtime readers know that my life experience is of not being appreciated for saying the truth. I can’t deny what I know or sugarcoat it. When I did try, needing to work jobs, pay bills, raise children without child support, pay for horses and other animals, invariably I became prone to fracturing within somehow, either feeling what I called ‘depression for the world’, anxiety disorders, even hives so severe my sinuses and eyes swelled and my nasal passages and esophageal airways closed, when I worked at NASA Goddard on the Y2K computer refresh team in 1999-2000. I had to be medicated in order to work.

Just yesterday I received an email from a follower who described their own same psychotropic marginalization experiences (I will reply today, in case you read this article – just framing my thoughts, obvs/here), and what struck me is how shamed we are, us real humans, who have empathy and heart, for being the persecuted ones! Reflection upon Job’s experiences and faith undeterred by adversity and loss displays the profound rightness of being refined by fire and the fact that the only thing that is real is what we cannot see, not what we can. And that’s what this impending cellular energy soul translation’s about – but no one wants to hear it. The solution to that is just being good, and that can be challenging.

I was no stranger to proselytizing, having been street preaching as a teenager from age 15-17 in the C.I.A.-crafted cult called the Forever Family – Church of Bible Understanding. Being also an artist, a high communicator and a survivor (victor) of abject abuse since birth, then (quelle surprise!) becoming – gasp – a “punk rocker” in the early Eighties set that torch’s carraige high, presaging this present day in clairvoyant definitiveness. So what’s different now, that I must pull myself from other writing projects to have a fireside chat here with my readers? Because I have figured this out: IT’S THE STRONG DELUSION. We’ve talked about this before on this site, and in contrast to most Believers I don’t associate the strong delusion with the alien disclosure question: that’s been outed since the Einstein/Oppenheimer letter to Eisenhower (you can download that here in PDF form) but gnow it to be the veil over humanity’s collective vision now, brought to laser-like cohesion with the coronavirus (names will change to suit their narratives). It’s sheer evil, and like what Job endures, is willed by The Creator. It’s BERISHEET, and was written in In The Beginning. You could even say it’s Fibonacci versus hexadecimal (the word ‘hex’ itself says it all).

I’ve literally been told now to not talk about what I know by my landlord and his friends.

They say it’s “negative”. They don’t want to hear it. It took 18 days of being who I am and literally verbatim last night I was instructed to not talk about what I know again. What? Will I be evicted? I’m certainly no stranger to being shunned.

How is this possible, this soul self-immolation the masses are practicing?

I work at maintaining a benign expression as inwardly my heart is breaking for them. Here’s an article I addressed this in IRON MOUNTAIN – A FACEBOOK DISCOURSE  which I posted last January (scroll down for the lyrics video of I SEE ALL GOOD PEOPLE by YES and after reading that article, ruminate on my words. I DARE YOU TO BE REAL AND BREAK FROM COGNITIVE DISSONANCE AND THE HERD. I certainly am incapable of dealing with the enforced illusion and will not conform to it.

In what kind of world is such a blatant denial and muzzling of my free speech allowed to occur? What sets this type of thinking and behavior up besides massive societal alchemical pharmakeia and sorcery, cultural social media reinforcement, brainwashing and programming based on a system of artificial Pavlovian rewards? WHAT MAKES THIS DIFFERENT FROM THE USE OF TELEVISION PROGRAMMING IN THE 1930’S THAT WAS USED TO PERVERT THE MINDS OF THE GERMAN PEOPLE AND INSTITUTE THE HOLOCAUST (PRECEDED BY LESSER-KNOWN HOLODOMOR)? NOTHING. It’s all exactly the same thing, and it’s satanic.

My true family has never seen my face nor I theirs, in real life, but they are readers here and members of my Patreon group. What is in our DNA which gives us the eyes to see and ears to hear, exactly as Jon Keen says in his latest videos is what I’ve been saying here on this website since I began it on the 33rd (a significant biblecode number) anniversary of my brother Charlie’s death on June 15, 2018. It’s what sets us apart, and is why we are targeted individuals. And with what’s being done by the world rulers to keep people in illusion until THE EVENT COMES, I’d like to try to survive as long as possible. I came back from India to sea level, east coast beltway America – to BABYLON HERSELF – to be here for my family: my biological family, but still no word from them, no contact, now over five years shunned). I should be used to this, right? 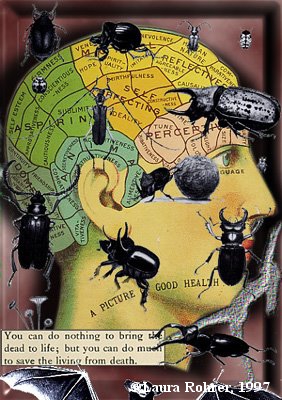 This was my first Photoshop creation, in which I endeavored to process Charlie’s death. I even took a scarab beetle my (now ex) brother-in-law Jon Little had given me (he who works for the N.S.A., and honestly, when he went out of his way to visit and give me this un-asked-for dead insect so personifying of the Annunaki soul trap and the death game the cabal plays) into the U.M.B.C computer lab and scanned it for the montage, along with the Victorian medical library Phrenology head.

What I never do become used to is witnessing people destroy themselves.

But it was destined to be, so I accept it. Still, I’d like to be around long enough for when my name’s called by my biological family. even if it’s at the end. I MUST BE HERE FOR THEM.

I made a copy of the GREENLAND movie trailer for you to download and send to everyone you love.

Who has read these articles I’ve written on this? (partial list)

IS THE SIDEWAYS SLIDE TO THE BLACK HOLE A FORTNIGHT AWAY?

THE CROSSING OF NIBIRU NOW, RED OXIDE, AND THE APOSTACY CAUSED BY WITCHCRAFT

THIS ARTICLE I WROTE ABOUT THE COMING CATACLYSMS WHICH ARE THE EARTH’S EXTINCTION LEVEL EVENTS COMING, AND SINGULARITY FOR THE FEW WHO ARE ABLE BASED ON THEIR DNA TO TRANSLATE TO NON-DIMENSIONAL CONSCIOUSNESS

and EXTRA SMALL, for context of how they harm us from the get-go

I’ll stop here, and I pray that every person who reads this will also follow every link and read every article mentioned.