Article written by Anita Untersee. [My additions in LEAF GREEN.]

Groomed by Rothschild bankers and a 2014 attendee of the Bilderberg meeting, Socialist Emmanuel Macron won the French election beating out Nationalist Liberty loving Marine Le Pen in 2017. Declaring Nationalism as a betrayal of Patriotism, he wanted to be “the French Obama”. [What, CLONED? Isn’t he already?] 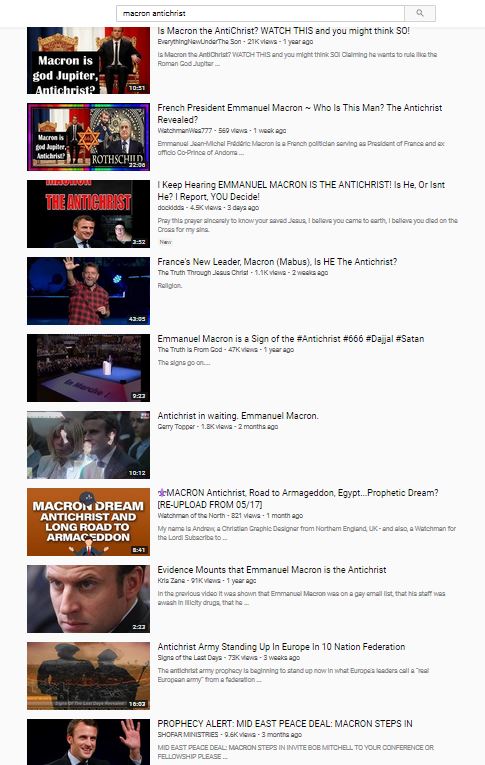 A National Enquirer sized scandalous schoolboy affair with his drama teacher, a 39-year-old mother of three, only fueled his dashing romantic image when the two later married. He appeared topless on an LGBT magazine and invited an LGBT dance troupe to the Elysee Palace. Giving new meaning to the “quaint” Clinton White House antics, it is just the tip of the iceberg. [Pedophilia in the education system, glamorized by acting/theater/predictive programming/wand of Holly.]

Declaring himself the new leader of the free world, despite the inability to govern his own nation, he appears as a potential candidate for an End Times Antichrist.

He proposed a 10-state army for the defense of Europe. In Revelation 17:12, the Bible predicts 10 kings receiving power for one hour with the Beast.

Increasing taxes, particularly for diesel fuel and the global Agenda 21 carbon tax, sparked the Yellow Jacket Movement. This growing protest has resulted in riots amassing 300,000 angry French laborers in the City of Lights and across France. Fearing for his life, Macron backed down on his demands in a nationally televised speech like a dog with his tailed tucked, helicopters standing by to whisk him away from the unwashed masses.

The meaning of his full name, given by atheist parents, couldn’t be more telling. Emmanuel – God with us

Jean – gift from God Michel – who is like God? [Definitely do have to point out that the great imitator who cannot create does reversals/flips of truth to deceive]

Frédéric – peaceful ruler (“Prince of Peace” is the title for Jesus Christ – Isaiah 9:6-7) Macron – a written or printed mark (Revelation 13 tells us “the mark… is the name of the beast (Antichrist)”.

Thankfully, we as Christians, know the true Emmanuel.

Behold, a virgin shall be with child, and shall bring forth a son, and they shall call his name Emmanuel, which being interpreted is, God with us. Matthew 1:23

During this joyous Christmas Season, let us remember, “The people who walked in darkness have seen a great light.”
Isaiah 9:2

For Unto us a child is born, unto us a child is given, and the government shall be upon his shoulder and his name shall be called Wonderful Counsellor, The Mighty God, The everlasting Father, The Prince of Peace. Isaiah 9:6

If we truly believe that the government is upon His shoulder, then we have nothing to fear. Jesus sparked a revolution of radical love to His believers, an end to death by His promise of everlasting life. We can rest under the shelter of his hand. Fear not. No counterfeit earthly leader can compare to the love, joy, peace and hope brought to earth at the birth of an unlikely King in a lowly manger.

[I don’t have it in me to continue the rejoinders after “the event”, so will simply publish this, and add that everyone needs to realize that the 5G space fence lockdown is in effect BIGtime now, and getting more intense daily. Access the photonic energy of the Most High creator’s mystery within. When feeling overwhelmed, attacked, depleted, take that as validation of the mystery. There is a reason they attack us and steal our soul energy. Knowing the truth sets you free. It may be a constant re-orientation (it is!) but remember who you are and keep your vibration up. Eat less/intermittent fast, deworm, eat clean, no dead anything that once lived and had a pulse. (Vegan is best.) Distill your water (two years in here). Connect inside with the LOVE in you, and everyone you love now, and have, who have passed on, or are coming in. LOVE them. Love carries, LOVE has wings.]