A LIGHT IN THE SKY IN EARLY AFTERNOON THAT DISAPPEARED LEAVING RAINBOW HALF-CIRCLE PORTAL DIRECTLY OVER ME, December 19, 2018

It was large, as large as the moon would be if in that spot the way things used to be (for reference, now all bets are off).

[Written about 3PM EST] Let me start by saying that I have been recording the skies all day. From the moment I looked out the kitchen window southward, with the due east to the left of my southern horizon view, which parallels the eastern seaboard coastline, and about sixty miles from Washington DC, I have observed the immediate post-dawn chemtrailling jets stacked one upon the other simultaneously spraying from east to west, low on the horizon, as I looked facing directly south. Literally a dozen lines made by these evil sociopaths. Every day they outdo their egregious days before.

My photographs as the day progressed show exactly the artificial cloud patterns created. Like yesterday, I looked at some of the formations and thought (and at one point inferred in a very short video) it looks like they are hiding crafts (“what are they hiding”). (I’ll post the images of their chemical aerosol stratospheric aerosol injection madness later/soon, and back-link.)

Early in the afternoon (timestamp on the phone photos) I went to use the bathroom and looked out its west-facing window. The cold, white sun was there at about 1-ish location-wise, slightly south-west of west, the sky was bizarrely patterned, and whoa! I said to myself, there is another light in the sky, west. It was shimmering rainbow iridescent like moving oil, in a paisley-shaped changing shape-shifting cloud. I grabbed the (older iPhone) camera, and ran outside, to get better pictures than through window glass. Took shots of it and a video, and then a delivery van drove up, window down, radio blaring, so I stopped filming. Once the vehicle had gone, and I was looking for the light which is just a few seconds was gone, I looked around, then up. DIRECTLY OVER MY HEAD WAS A PERFECT HALF CIRCLE RAINBOW WITH CLEAR SKY IN THE CENTER. *I began to film and document it, took between 2 and three minutes of video, then turned off my camera and went inside.

I live in a church converted into apartments, seven of them. I do know that the owners, business partners who buy buildings for rental properties, told me that they exhumed the grave of the minister who built this church in 1870 and who is buried in the backyard cemetery (there is no yard, only cemetery and parking lot/driveway/stairwell to basement which smells like churchyard mold). They exhumed his grave without legal permit or pastoral presence, so they could dig a poured concrete stairwell and basement entry. His gravestone and casket was lifted out and put back in, his headstone was moved and set away from its original place, as was his casket, and his footstone is sideways. They didn’t even orient it correctly. So, and since I sense and see spirits, that’s some bad ju-ju present. I have talked with three other tenants who have seen orbs and felt a presence which all creeped them out. I have written about how my hat flew off the shelf as if pushed outward a few months back (not my first experience with entities moving things).

I went upstairs to write the experience while it was fresh and as I looked at the two videos I had made of the light, and then the semi-circular portal overhead, after taking a few still photos, I realized that they had each filmed while off, not on. I DID NOT MAKE THAT MISTAKE. I realized with a chilling understanding that my phone/camera had been manipulated by them. *supernatural

Before sitting down to write this, I made a small pot of coffee, to collect my thoughts and listen to some reflection on our spiritual reality on a CD. While I had been outside filming, the already loud harrassing electronic frequencies increased even more, incredulously. (I am always shocked as they keep ramping it up as time goes on, why shocked, I don’t know, and maybe I’ll get over that, but it does help me maintain a sense of humor, in an odd way.) So by the time my coffee was done I checked the sky and it was cleared to the west and south, pretty much. FOR THE FIRST TIME ALL DAY.

I truly believe that the eastern seaboard is under a heavy flotilla of crafts.
Many mornings begin with the sound of very high aircraft and what sounds like supersonic flights and their fighting/evasion/chasing. I don’t know how to really explain that further.

And as I type, my head is feeling TREMENDOUS PRESSURE, LIKE A VISE HAS GRIPPED MY SPINE ABOUT C-3 OR C4, AND MY HEAD IS BEING SQUEEZED. This feeling is not pleasant, and, like the chemtrails, is a new level of bad.
How much of this is due to CERN and the entities they are summoning.

I will also add that my LAPTOP HAS BEEN FUCKED WITH ALL DAY AND IT WILL START UP, NOTHING IS WRONG WITH IT, AND IT SHUTS OFF AS IF FORCED OFF AT THE MOTHERBOARD. ALL DIAGNOSTICS RUN SAY IT’S FINE. I AM A CERTIFIED TECH WHO WORKED FOR AEROTEK, NASA GODDARD AND DISCOVERY CHANNEL. (I now embrace my low credit score 🙂

Just before i went to the bathroom and this all started, I had been – when I got the laptop working after six hours since it went haywire after I got up – writing a blogpost about French president Emmanuel Macron possibly being the antichrist. I had just made an image of YouTube videos in a row, with the search macron antichrist above, and was about to insert it into my wordpress post editor – and the laptop powered off.
And all day I have been thinking that it looks like crafts are being hidden by the chemtrails. 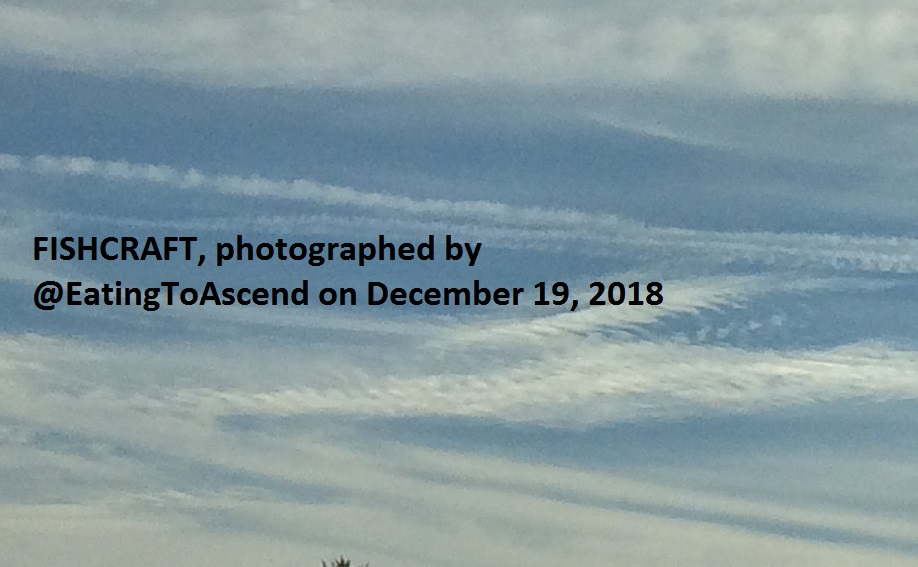 And my granddaughter drew a drawing (she’s almost fourteen now, and gifted) of a large, malevolent fish-like but with gills creature, and eyes, and I saw it on Monday (will get a pic for comparison as soon as I can, have “a call in”) and it was practically pictured in the sky (see photograph) and did she have a precognition of Lucifer, or an alien ship, or evil in the aether, or below; the deep abyss? SAME.
(The larger image below)

I am done recording this. Please Father Creator Most High draw my loved ones to you, unveil their eyes and hearts. My DNA is in them, I love them. We were all lied to. December 19, 2018. (Written on the very old off-network non-wifi laptop which is basically a typewriter, and saving to removeable drives… do not trust the ghosts in the machine…)

(Posted the day before my daughter-in-law Nichole Travers Little Cabana died at the blood-stained hands of the Sackler family’s drug fentanyl.)