UPDATED JUNE 12, 2019 WITH THE VIDEO IMMEDIATELY BELOW THIS PARAGRAPH. I posted this blogpost originally on August 8, 2018, and the controllers do not let me build a YouTube channel. This morning I see this video, exactly what I saw last August. We are fortunate that some people are still able to post truth online. That will end soon.

I live on the East Coast in the USA, and have a decent vantage from my windows, living on a hill. I watch the skies, as my readers know.

This evening the sun was setting in its furiously hot white geoengineered-cloud obscured fashion, in the West/Northwest, which it has been doing for months now. That was at 7PM, maybe 6:45PM, when I looked.

At 8:10PM, I took my newly-rescued dog out for a quick potty break, interrupting my listening to Zen Garcia’s weekly radio show. As soon as I got outside, everything had changed. The setting sun was no longer where had been. For months now it has been blazing until nearly 9PM here at a point due west/northwest, approximately 235′, but now it was in a different place? In an hour? It was directly west! The street I live on runs due west, and so it was ‘at the end of it’.

Had it moved? Or did the earth…

And then I looked to my right, turning clockwise… and could see through the trees as I walked “Chip”, that there was illumination in the sky past the due north.

We walked toward it. 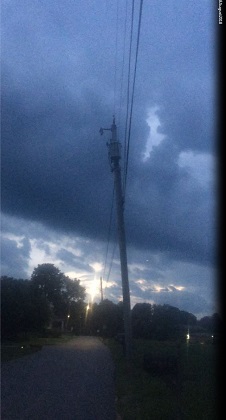 And there I saw another sun setting, or at least a huge illuminating celestial body – behind even more manufactured clouds. I quickly went back in for my camera, and began filming.. Here’s the link to the video: https://www.bitchute.com/video/u9yQG2CsOscM (it’s not on YouTube, #censorship).

I looked back toward the west. Yes, two light sources skyward.
One in the north/north east, and one due west.

This is our earth moving, as our poles flip. We have discussed this. Add to the equation yesterday’s video, and this great deception that there are “other gods”, called aliens or extraterrestrials. The television show Ancient Aliens was created to entrain everyone in the false narrative that beings from other parts of the universe created us, and will return to help us, and are here now, possibly. This is the alien deception. Not that there are aliens and the governments are hiding the fact that there are from us, but that the term alien itself is a lie: they are the nephilim, the fallen angels, and are not gods. There is only one Creator. The Almighty we call God or YHVH or Jehovah. So even that there is such thing as a god is a part of the Luciferian satanic deception perpetrated by the anunnaki fallen angels. They have done this to enslave us, and they know that the time is coming in which they will be thrown into the pit, and are trying to, in their completely debased rebelliousness against the one true God the Most High who denied their appeal through Enoch to forgive them, drag as many humans into the eternal fires of damnation with them.

Now the topic of Zen’s show tonight is his continuing readings from the ancient text on the End Days, which we are in. We are the Fig Tree Generation, and this is the 70th year since the prophecy was fulfilled regarding Israel becoming a state in 1948. Examining the world events, the Middle East, China, Russia, the US, Vatican (yes, it is a country, as is London and the District of Columbia), Korea… the weather, heat, fires, floods, droughts, volcanoes, dust storms, famines… the utter godlessness, the idolatry and obsession with status and perversions… and the embracing by the masses of their own enslavement disguised as freedoms, truly we are here, and this time is unfolding now.

After the show ended, rain began, with thunder. It sounded far away. Again I looked outside, and the downpour was heavy, with lightning directly above me. Not arcing, just huge cloud illuminations. The thunder, as I counted seconds, had no correlation time-wise with the lightning. I continued to watch and listen, and it happened for some time (until I came in to write this). I noticed that my head hurt terribly, and myears were both ringing more than usual, all suddenly.
And I began to wonder… is this a HAARPed storm (we don’t have “natural” anymore, not for years, thanks to geoengineering), or is this something more, some WAR high above. For it sure felt like it.

When the King of King comes on the clouds, will you be ready? I know that I wonder this, and each day as it passes feel compelled to reach out more to others with these truths I share with you here.

There are so many changes happening as these dimensions shift, staying focused and dwelling in the Holy Spirit requires diligence and self-forgiveness both. Read His Word, as much as possible. Talk to Him, and sing his praises out loud. Whatever gifts He gave you, use them to share Him and His Coming with others. Pray to Our Father to speak to the hearts of those you love who think you’re crazy for believing this!

We are in the last days. We don’t know the hour… but it’s coming. Do not be asleep in your awareness, and do not be deceived by the serpent. Stay sober and ready. Fast, even intermittently. Believe on His promises. He made you and gave His son for your sake and mine, and His Mercy is neverending for those who turn from their sins – and we all do.

If you observed anything unusual, please share in the comments. I would love to know who else may have witnessed these two “suns” besides myself. If you disagree, tell me why. Just let’s talk.

May the Almighty Most High God bless you, much love!

P.S. Will update tomorrow, please check back! If you haven’t subscribed, do.