Last night I went to bed at 10:30PM. A strong electromagnetic storm had been going on for the past three hours, as Nibiru is now very close: the skies are very obscured with HAARPed clouds of the chemsprays to create the filters that hide the light sprectrum people would see Nibiru by, which also are toxic to all life, and killing it (all), creating destruction and a world of controllable nanobot technology for the transhuman agenda of Lucifer. Because of the plasma arc-ing, all electrical plugs are pulled from outlets except for the air conditioner, and there are no WiFi devices on, no LED is on either (LiFi), and the cell is debatteried, in a metal box. Any EMFs are from sources outside my apartment.

As I do when lying down to sleep, I thanked God for the day, and cleared my mind and breathed and let go to sleep.

I awoke two hours later (I later found out), after this. I will do my best to record simply what I experienced. There is no “transition” into this Happening; no frame of reference, segue, etc.

I realized that I was looking at a scene my granddaughter Emily had made with a program: it seemed like I had found this online (now I am blocked from her Instagram, so there is truly no ‘window’ for me into her life), and as I looked at it with the great interest I had, seeing the room, I saw it was of depth, and moving. Like an environmental shadowbox with objects and light and motion.

It was a room I looked into as if there were no wall between me and it. [small diagram] It was warmly lit with glowing golden light from three bay windows (like my girlhood bedroom had) at the wall opposite me. A soft, late afternoon light, not harsh like the light now. I could see that there was some furniture; shelves, things hanging on the walls behind the three chairs arranged in a semi-circle directly in front of me. A rug, perhaps braided like the one I had made when Emily lived with me in 2013, was in the center of the floor, the chairs around it. There were two pieces of white paper on the rug, one to the right and closer to me near the chair to the right-most of the semi-circle, and another toward the center chair. I was straining to read them (they were written on by her). All I can recall is that they expressed her feelings including about our enforced estrangement, and as I studied the scene, I realized it shimmered and was moving, and a cat quickly got up (it had looked like it was curled sleeping) from the left chair and jumped to the center chair, then the chair on the right, and sat. I saw that the cat was a burnished auburn-red colored tabby, and I realized I was seeing something that was happening, not just a painting or drawing.

After a very short pause, I heard her somewhat hesitantly reply (she is not allowed to interact with me and I am shunned, she was forced at age 11 to cut me out of her life, and she wrote in a book she made and gave to me – a small baby book with inserts she filled of things for me to remember her by “for when you think of me” she said as she took it from her purse and put it in my hand, looking back to see if her dad (my son Max) and his second wife Laura saw her do this – “I tear off a piece of my soul and give it to you for you to keep”): “Yes”. Another very short pause and in a voice that quickly shifted into the confident voice I recognized from when we were allowed to be gramma and granddaughter, she said “And you can see my thoughts and hear what I am thinking.”

And another “page” floated down, as a leaf might settle to the bottom of a pool of water, so thin and delicate, like a gossamer membrane like the inside of an egg the chick hatches from, but thinner, as if it was all color with no backing surface. It [diagram] came right down, obviously intentionally, and I saw it as if it were in a watery atmosphere. As it reached the rug, its edges still quavered and rippled, and the room was full of energy. I looked at the drawing (*it was a drawing she did) enraptured, and it was a white Rose of Sharon flower with carmine-tinted edges and center, and the one flower filled the paper, which never truly ‘settled’, but just-so-delicately hovered over the rug, as if alive.

All of this happened in an instant.

I replied (to her saying to me “and you can see my thoughts”, for all of this happened with no delays: experienced): “It’s beautiful. And I can hear you whistling.” For she had been softly whistling a melody as the flower came down. (Jamie whistled, I whistled, Max whistles.)

And then the room began to dim, and the dimension and ethereal glow withdrew as if a dial had been turned like volume down, and in the pause as I waited then, realizing as it dimmed that she was not going to reply because the portal closed, the veil drew back over, and I rose to my elbows and came to a waking state, no longer dreaming or asleep, and felt the bed and the room around me, and the sound of the ceiling fan and the clock on the wall ticking, and I sobbed, and thanked God for letting us connect in Spirit. 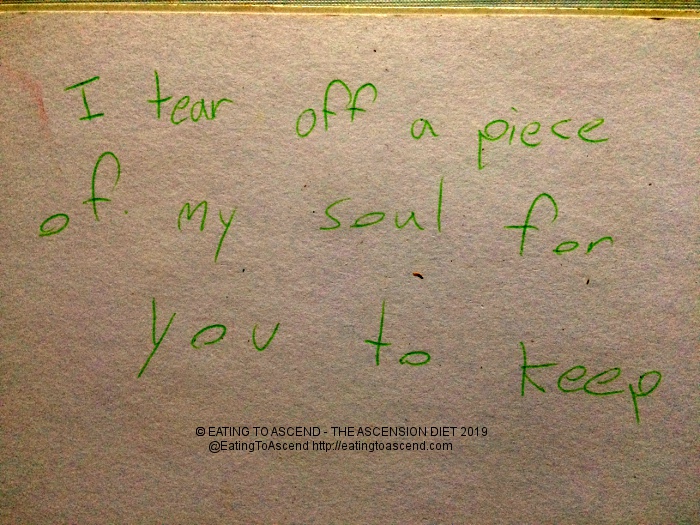 ** At first I wondered, awake now, if it was my ~daughter~ Emily I connected with in this experience, a vision, a soul exchange, but quickly realized it was Emme, emily my granddaughter. And the cat, the color of her henna-dyed hair… she loves cats: it was my granddaughter. I got a drink of water, wiped the tears off and blew the mucousal archons of emotional reaction from my nose and again thanked the Most High Father God for giving me this gift, allowing Emily and I to connect in our heart space.

I love you, Emily. [drawing as I always do two connected winged hearts] I am here with you always.

Emily’s two favorite people: Mommy and Gramma, and daisies are her favorite flower because that was the name of the pony I gave her who was poisoned and died

* from her mind’s eye, which through our DNA and pineal glands our spirits communicated

** Because also my daughter is named Emily; my granddaughter Emily is named after her. I named my daughter Emily ‘Emily’ because she did not look like a ‘Ravenna’, the name I had planned to give her at birth, the ‘art capital of Italy” so I named her after the poet whose poems I loved reading then, Emily Dickinson.]

This post was erased by ~someone, cabal, entity, ex~ now restored 7PM EST on 29August2019. Anyone reading my posts, if content is missing, please let me know!