The powers-that-be that do not want you to know that The Destroyer is here have mad eit necessary for me to repost this article I originally posted last August. It’s a straightforward exposé of what’s happening RIGHT NOW, actually. That’s why it’s been censored. (And also why I have had to combat so many evil attempts at my life recently).

Here it is, again:

As some of this blog’s followers may realize, I reference the YouTube channel WSO occasionally, as he has been investigating, to the best of his ability, the incoming Wormwood planetary system we call Nibiru. Between WSO and other Nibiru researchers, a non-conventional alliance, or “team”, as WSO founder Steve Olson calls it, has formed to observe, document, comprehend and disseminate to the world the evidence collected that not only they discover but is sent to them from people all over the world, myself included.

I’ve had a few brief exchanges with Steve, and watched many of his videos, and find him to be dedicated, sincere and, well, good. He even featured one of my photographs in this video looking into Ezekiel’s Wheel, called Clear Image of Anomaly – From Ground NW Sky – IMPORTANT. (If you want to watch it, click the title, otherwise, please continue reading!)

July 17, 2019 UPDATE! Either WSO is gone (horrors! NOOOO!) or the video was banned. Clicking the title yields YT’s infamous VIDEO UNAVAILABLE – but it’s mirrored here
WOW is the bad brother getting big.

And THIS, my friends, is how we know – and YOU can know – that we are saying the forbidden truth they do not want you to know.

When I say that this Nibiru investigation is unconventional, by that I mean that is not recognized by anything that is mainstream: government, media, accredited and tenured (funded by grants e.g. “bought”, sold out) academics and historians, organized and bureaucratically correct 501c3 tax-paying recognized churches of any denomination, to the man on the street, who never looks up, too busy with their smart watch, phone or tablet to look and see the chemtrails – and that the sky has changed! The ruling class of powers-that-be, which exert total dominance over everything that is put forth as to be known in this world: all supposed facts, have had their mouthpiece organizations declare that “twelve new clouds have been discovered for the first time in thirty years of observation”, according to the Weather Channel’s article, just one of the hundreds of search engine results for instances of this fraud. So far, and I have not spent hours looking (but it should not be that difficult to locate a timeline of dates, if the [sic] ‘discovery of new clouds’ is supposedly a fact), I cannot find the name of the cloud that the United Nations’ run World Meteorological Organization claims to have “discovered” thirty years ago, which incidentally follows the advent of the Stratospheric Aerosol Injection Program, and more, in what we know as global geoengineering that was begun in the 1950’s, and began to be noticed by an observant public few in the early 1970’s.

HAARP-INDUCED MANMADE CLOUD REFERRED TO AS ROLL OR VOLUTUS

By the ’90’s, people all over the world began posting pictures with comments and questions on the internet, asking for answers as to what was happening, only to be met with the fabricated “climate change” ruse being hatched by those who really rule this planet. And going into this millennium, the CIA-coined terms “conspiracy theorist” and “chemtrails” entered mainstream media programming including television, radio, printed newspapers, magazines and government agency as well as academic journals, these deliberately misleading and utterly pejorative labels were – and are still – used to discredit good, honest, ethical and caring people – good stewards of the earth (unlike the “elite”) and manipulate the mass population into the growing deception, which is not only to control and use weather as a weapon, but to hide the approaching planetary system of Nibiru, which WSO and others investigate.

This occulted (the word means hidden) celestial event of the crossing of Nibiru’s orbit with Earth’s occurs every 3,600 years, causes cataclysmic upheavals and a re-set for the planet and its species – including us. The few who survive and repopulate are left with no knowledge of their own history, and must begin again the human journey which always asks: who are we, and where did we come from? And most importantly, where are we going? For although humanity’s knowledge of itself based on accumulated facts of true history can be taken away, there are always traces of the past left to be found, not only in physical things through archeological and cultural physical evidence, including tablets, manuscripts, and carvings on rocks, but knowledge remains in our DNA, which is capable of storing more information than a quantum computer. The intelligence community site Nextgov reports: “Researchers estimate DNA and similar polymers can store information more than 100,000 times more efficiently than traditional data storage technology, and polymers’ stable molecular structure allows them to last hundreds of years without losing or corrupting information. More efficient data storage technology could also help researchers gain increased insights from today’s state-of-the-art supercomputers.” Which is why they want to change it with Transhumanism, to alter our genetic code and make us forget we are of The Most High God. Yehushua’s words as He prayed to our Father before his crucifixion bear out the pantheistic truth that Jehovah is the Most High God: “And this is life eternal, that they might know thee the only true God, and Jesus Christ, whom thou hast sent.” John 17:3 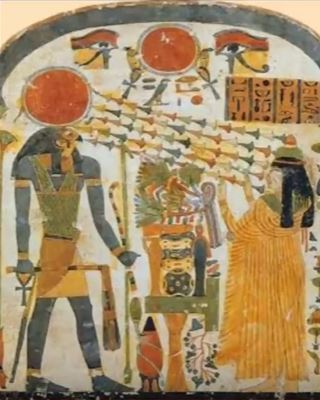 Pre-dynastic mural of Horus and Nut

What the team we are listening to in this video are misinterpreting is who and what the two eyes mean, and who, shall we say, the “players” are here, as depicted in this ancient mural below. The Eye of Horus, or more specifically the left eye, was said to be the moon. The right eye was identified the Eye of Ra, and was said to be the sun.

Horus – Hor Merti, or “Horus of the two eyes” is in reality the Anunnaki nephilim/fallen angel, has been electromagnetically detected, seen and recorded as approaching Earth, and according to measurement is, at the time of the EM signature which was August 3, 2018, is approximately 60% as far away from us as our sun is, we must be careful not to ascribe incorrect identification of which god this Eye of Horus is attributed to as we share and discuss this truly significant cosmological event. 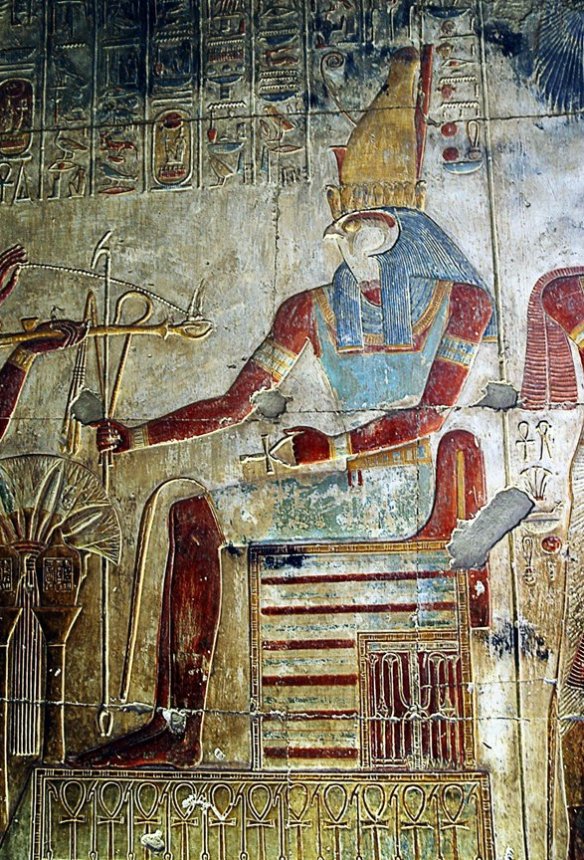 The fate of humans souls hinges on understanding this.

THE FATE OF ALL HUMANITY.

For sadly, the researchers that WSO has allowed to speak in this video, although each is openly proclaiming faith in God, YHVH (Jayweh) and Jesus Christ, are referring to this incoming Eye Of Horus (they mistakenly call Ra) as Jesus, and state that the sun as depicted in the painting in between the two eyes is our sun – and our God. In reality, these gods form the basis of the Sumerian culture, which led to Babylon, and are the reason for the flood of Noah, according to careful examination of the extra-biblical texts to fill out the information given in the canonical bible, which was edited – and many books, manuscripts and letters that should have been in the spiritual record of our world prohibited – by the Roman Empire, which became the Roman Catholic Church. It was the culture we commonly call Egyptian which instituted the paradigm of monarchy: kingships and the ruling class. We have very little conception of human history here on earth before the pre-dynastic period (and it is called Egyptian based on geography, make no mistake, these were what came to be known as Sumerians), and knowledge from such texts (hieroglyphs and cunieforms) such as the Emerald Tablets of Thoth, the Enuma Elish, the Thracian Chronicles, manuscripts from the Dead Sea Scrolls including the Book of Enoch and the Apocrypha, as well as antediluvian cave paintings, rock carvings and archeological finds on every continent. Who knows what has been secreted in the Vatican, or other monarchies worldwide.

In fact, Thoth is considered by the Egyptians to have “invented the arts and sciences, and giving names to things”, when in actuality, this was done by the fallen angels who landed on Mount Hermon, land now held in high security and 24 hour defense watch by the United Nations. The lies know no bounds…

The god Re, or Ra, was not deified by the state of Egypt until the 5th dynasty; much later in time than the time of Horus when immortalized in the first mural, above. By this time, the culture worshiped and slaved under pharaohs known as either Osiris or the sun god Annu, and these were two distinctly separate entities. Re’s (or Ra’s) name is understood to translate as “creative power”, and the mythos developed that he was “the creator”.

However, his cultural entrance did not occur until the 5th dynasty, many years after the appearance of Horus. Therefore, Ra – the sun – is not God. So here is is where the researchers in this video by WSO are so way off that it’s dangerous for those who rely on learning from the information provided to prepare for the end of days and their judgement and entrance to the kingdom of our One True God and Almighty Father, whose son is Jesus Christ. Making matters evening more occluded, the Eye of Horus is not Jesus. With all respect to their sincere efforts, and I believe that they are trying to help others, Catfish Glass and Relentless Maverik are in far deeper than they understand in terms of theological cosmology and the pantheon of gods. I suggest to everyone who watches this video that they utilize the scientific electromagnetic and photographic documentation provided, but to understand the meaning of exactly which GOD and gods were are talking about in these eternally pivotal times, go to sources with actual understanding of who our Father God Source is, based on decades of study. I suggest (name/YT channel) Zen Garcia (Endeavor Freedom), Steve Quayle, Tom Horn, Gary Wayne and Timothy Alberino, to start with. These men have been researching and publishing on the truth of who we are for almost thirty years each (Tim Alberino less, he’s younger), and Zen Garcia’s seminal works, over 25 books published, release and reunite the meaning of all the sacred knowledge that was – and still is, but is quickly being revealed – hidden by the works of darkness who run this world.

What you see is indeed the Eye of Horus. We are not able to understand completely how the icon so well known is “written” in the G.O.E.S. magnetic recorded signature, but it is HUGE. It is Anunnaki, as the Sumerians called it. It is nephilim, a fallen angel. Is it Lucifer? Marduk? For these names could be interchangeable. The pantheon of gods shows that all cultures religions are actually the same. (If you want to understand this quickly, read The Genesis 6 Conspiracy: How Secret Societies and the Descendants of Giants Plan to Enslave Mankind, by Gary Wayne). It’s a huge nut to crack, as we have to unlearn all we have been taught.

One thing for sure, that eye’s not Jesus, and that sun in our sky’s not our heavenly Father.

I’d love to hear your thoughts – or questions – in the comments. LOVE.