On July 29th, 2022 Yuval Noah Harari posted a video on his Twitter account called WE STAND ON THE EDGE OF SILICON LIFE and proves that he is not human but one of Lucifer’s highest-ranking fallen angels.

This video is the magician’s sorcery siren song for Transhumanism. Just as the Egyptians covered all their surfaces with magical spells called Heiroglyphs, the puny, disgusting excuse for a breather in a host body Harari had thus video made in an attempt to spellcast upon humans too dumbed down by pharmakeia of every form to detect otherwise.

I am in a personal spiritual battle against this enemy of Life. Humans are made in the image of God BY God.

Satan pretends that God also invented inorganic elements: they will be destroyed.

THE ENEMY OPERATES ON FEAR TO PARALIZE YOUR HEART, THE HYPERCOMMUNICATION PORTAL TO YHVH, JESUS CHRIST, AND WHERE THE HOLY SPIRIT IN YOU RESIDES.

ONLY HUMANS WHO PROFESS JESUS CHRIST ARE THE TEMPLE OF GOD.

This site is a resource for the Left Behind to help them preserve their souls. TRUTH IS HERE.
Truth is what is needed, not lies. There is only truth, and that truth is LIGHT ENERGY WHICH IS JESUS CHRIST, THE TRINITY GODHEAD.
Unfortunately, most of mankind has been so poisoned that they cannot receive the Truth at all.

Satan is the Father of Lies, a thief and a murderer, and Harari, Schwab, Fauci, Rothschild, Rockefeller, Soros, Gates, all political and military leaders, the Royal Family, 501c3-accepting churches and religions, corporations and the media will burn forever in the pit with him in approximately seven years!

We see in this video the flawed physiognomies of the genetically altered who have been designed by the AI with its CRISPR software and gene text editing.

As the eyes were meant to see and the ears to hear, the heart is meant to understand, to discern, to give insight.

In the video above, Harari ends attacking the human heart. WHY? 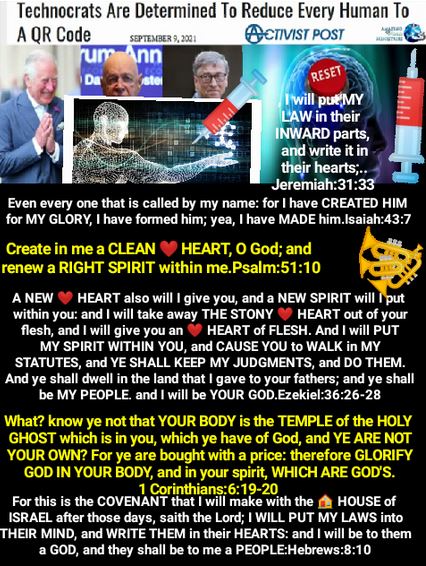 OUR HEART IS WHAT REFINES OUR SOULS WITHIN OUR DNA WHICH SINGS TO GOD. Download the PDF below.

Rein Laskow PDF: The Effects of Conscious Intention On DNA (click to download, will open in a new window)

THE BODY KILLS THE SOUL

“May God so fill us today with the heart of Christ that we may glow with the divine fire of holy desire.” A.B. Simpson

Door of My Heart

If you resist all this, after the rapture when Tribulation begins full-force, return to this website.