LaPalma is in full eruption.
Cone collapsing, landslides begun.
All the warnings of a tsunami hitting the coast should be heeded 12 miles inland because if the tsunami happens, it takes out East Coast ports from New York to Florida.
Many experts say the earthquakes there are manmade, geo-warfare, that this isn’t natural.
(Anonymous source)

This is great filming showing the 4 mouths of the #LaPalma volcano.
It should be noted that the overall situation is still increasing especially with the new record M5.0 earthquake about 15 minutes ago.pic.twitter.com/PGJLa0133d 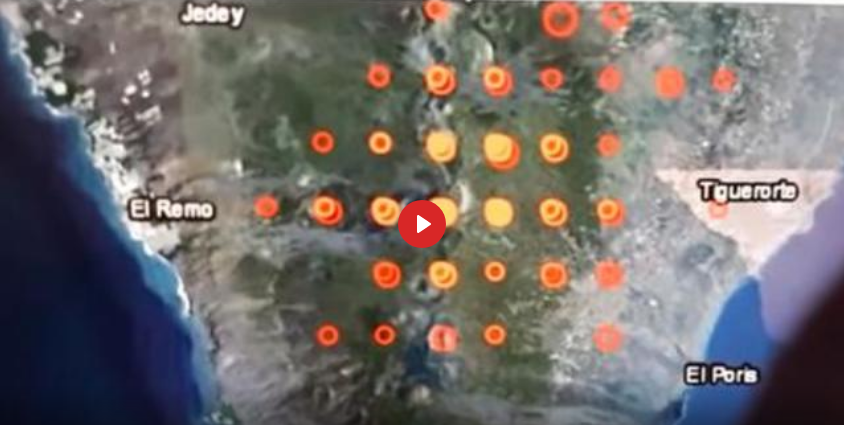 UPDATE 30OCT2021 – The earthquakes are occurring in a grid pattern, as shown above. #geowarfare #DEW

Some might ask why would this not be mainstream news already? How would alerting the vulnerable public behoove their plan (Agenda 201)? The program of the elite is to reduce population. If even twelve hours (an hour a mile, on foot) is a recommended evacuation time, why would they broadcast that? Where would people go? There are thousands and thousands of containers on cargo ships outside of all of the United States ports, East Coast and West, products held hostage in the supply chain breakdown that has been engineered and is part of the Operation Lockstep plan. This is an operation in progress, just one of the multitude of evil machinations being done in order to collapse society and hinder mankind from getting right with the Creator, who, as the light of the world and the plasma energy of the singularity, is coming with the clouds they keep aiming their toxic aerosols into.

The significance of the Freemasonry carvings on the Cathedral of St. John the Divine predict the fall of the Twin Towers and destruction of New York City by tsunami tidal waves:
“The destruction of New York City (including the Twin Towers) sculpted right on the building… Strange occult symbols on the floor… Weird rituals being performed in the sanctuary… Home of the Temple of Understanding which admittedly seeks to instate a new world religion…
“The pagan intellectuals reclothed their original ideas in a garment of christian phraseology but bestowed the keys of the symbolism only upon those duly initiated and bound to secrecy”
– Manly P. Hall, The Secret Teachings of All Ages
St. John the Divine is credited for writing the Book of Revelation in the Bible, which describes in symbolic imagery the events of the apocalypse. Occultists believe that the Book of Revelation has been hermetically coded to reveal its true meaning to the initiates of esoteric teachings. This scene, carved on the west entrance of the cathedral, depicts New York as being “Babylon the Great”, the city that gets completely destroyed by the wrath of God.
“Fallen! Fallen is Babylon the Great!
She has become a home for demons
and a haunt for every evil spirit,
a haunt for every unclean and detestable bird.
For all the nations have drunk
the maddening wine of her adulteries.
The kings of the earth committed adultery with her,
and the merchants of the earth grew rich from her excessive luxuries.” – Revelation 18

Carved by freemasons in the late 19th century, pillar on St. John’s Cathedral in New York City depicts the city of skyscrapers being devastated by a tsunami with waves much taller than the buildings

“No harm will overtake you,
no disaster will come near your tent.
For He will command his angels concerning you
to guard you in all your ways;
they will lift you up in their hands,
so that you will not strike your foot against a stone.” – Psalms 91:10-12