and of course the truth is immediately covered up. I’m surprised they don’t call it a weather balloon.

As this filtrates through the foul and murky web of disinformation and propaganda, keep in mind that all “news” narrative delivered is lies. The geoengineering is used to hide the system, shaped like a cross, four lights illuminating the sky. Any observant witness can discern this on a daily basis, simply by seeing reality.
They are calling this a satellite hit by a missile, an exploded rocket, even a meteor, a failed SpaceX. They’ll say anything but THE TRUTH. That “meteor” is the enacted wrath of The Creator. The military is fighting GOD.
Look at these videos carefully: this won’t be the first time this will happen. The Holy War has already been won. *We are here to endure the test.

Many people in Oregon were left stunned Thursday night as they spotted what looked like a large meteor breaking apart in the sky.
While it hasn't been confirmed what the object was, the National Weather Service believes it might be debris from a rocket.https://t.co/nh9brAa4N3 pic.twitter.com/DKYwaQV7Fd

A video captured Thursday night by Andy VanOrder showed what appeared to be a dozen or more objects moving together across the horizon.👽https://t.co/MMNux6koDH

Based on the observed video, this looks more likely than a bolide meteor or similar object as they would be moving far faster on impact with our atmosphere. There are NO expected impacts on the ground in our region at this time. More info will be posted as it becomes available.

Strange lights in the sky over the Oregon Coast! My daughter loved capturing the moment! #ufo #meteorshower #NWS pic.twitter.com/vnag0ADB9p

And then, of course, China is blamed the same way they blamed “Covid” as a virus from Wuhan, when we know SARS-CovAIDS is a bioweapon made by the one world government here in Babylon at Fort Detrick, and they arranged a faux-theft shell game to make China the fall guy, when it is all the same top of the pyramid of Mystery Babylon of the Devil. Walk into any Walmart and see the proof: everything is from China, made by slaves, in a country that built its “Great Wall” with HUMENT – human bodies in the cement. I think the comment is pretty funny, so will add it after the screenshot of this article called  “U.S. military believed to have destroyed a Chinese satellite” 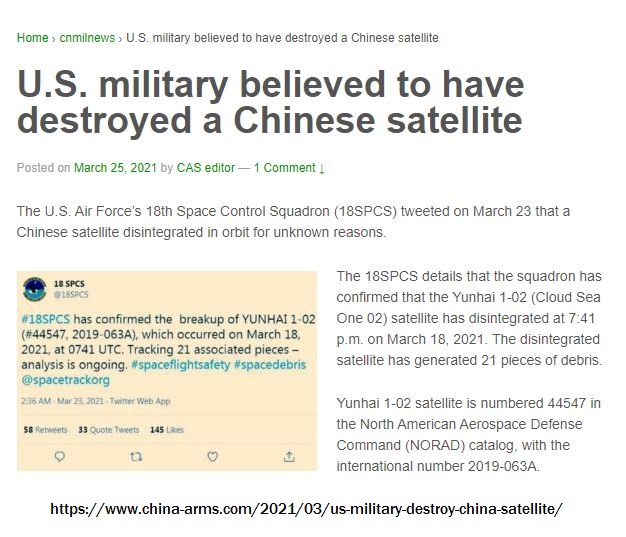 Pete says, on March 25, 2021 at 2:03PM: “This is an American dirty work, revenge, revenge and revenge. Otherwise, there will be more sabotage from this white devil.”

©EatingToAscend.com, All rights reserved.
The owner of this site waives her right to be recognized as a Person (or PERSON) before the law (Article 6, Universal Declaration of Human Rights; Article 16, International Covenant on Civil and Political Rights)