READ WHAT WAS WRITTEN APPROXIMATELY 18,000 YEARS AGO ABOUT WHAT IS HAPPENING NOW, From the Kolbrin Bible called the BRONZE BOOK, as it was scribed on bronze plates to outlast future cataclysms, and was hidden away from humanity by the Roman Empire and the catholic church, and returned to humanity with the discovery of the cache of the Dead Sea Scrolls. In between earth resets, which occur as Nibiru makes its elliptical orbit within this universe, scribes would gather all knowledge so that humans who survived could find the stored knowledge of who they are and what they can do, and how. But that was hidden after the reset we know of as the ICE AGE. Christ came to teach humans how to “translate” to the higher dimensions with light bodies, in the Essene Gospels – they hid them, too. The hid the fact that humans have parasites, which are them: archons in the body. Now we are in the STRONG DELUSION and as you read what was written possibly as far back as 18,000 years ago, compare to what is happening now. They created the lie called climate change to hide what you would be seeing if the skies had not been polluted with all the geoengineering substances and other things I have listed many times on this website. The 5G is a Fowler’s Net (Psalms 91:3) to trap your soul. Share this post. <3

The link below is the PDF download for the KOLBRIN, which is also available online free on many other sites as well! – added this sentence 17April2020 10:20AM Delhi time fro Chitta Ananda

KOLBRIN BIBLE The Bronze book COMPLETE
And yes, books were called bibles and scriptures long before the rulers of this world who created religions to divide people and obscure truth appropriated the words, in effect weaponizing them, and using them to wrongly label truth sayers as delusional heretics. This is how they control the narrative which has blinded humanity. 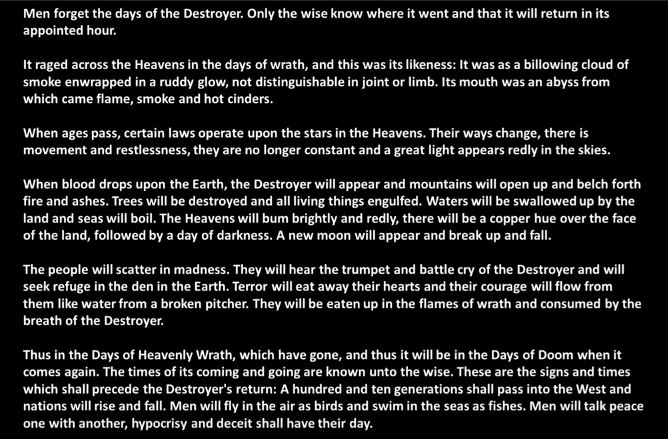 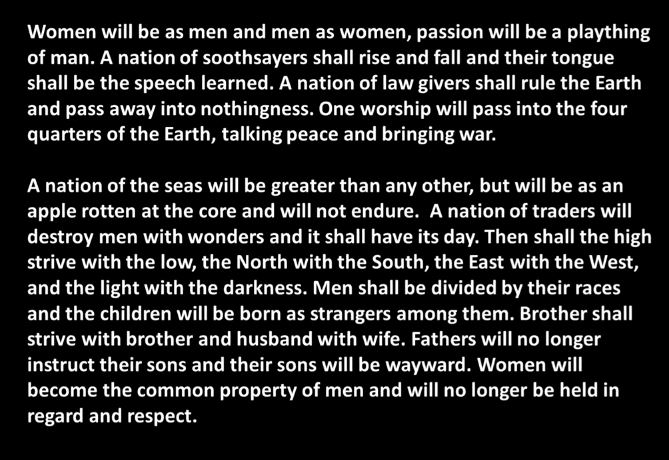 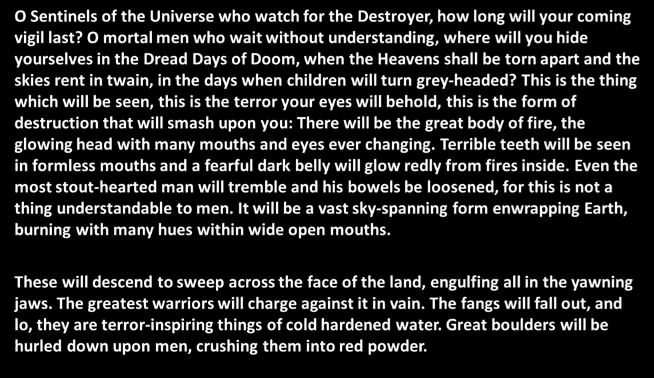 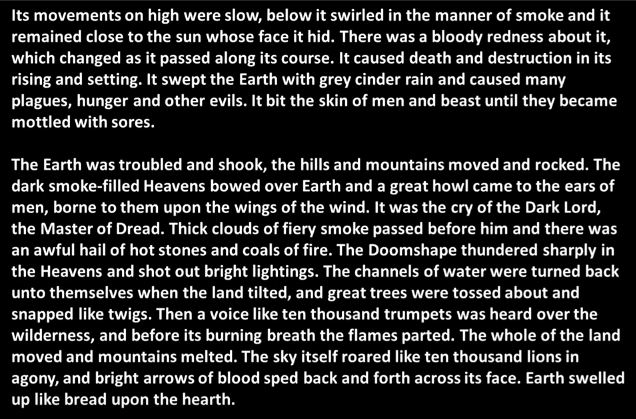 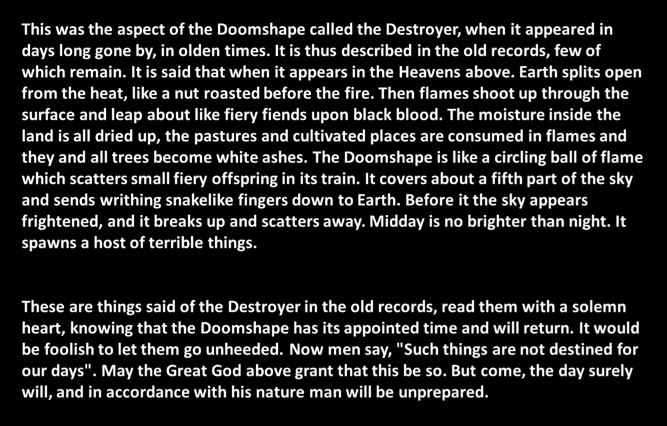 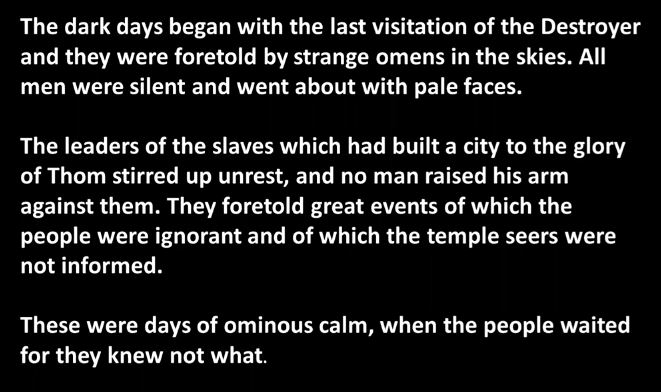 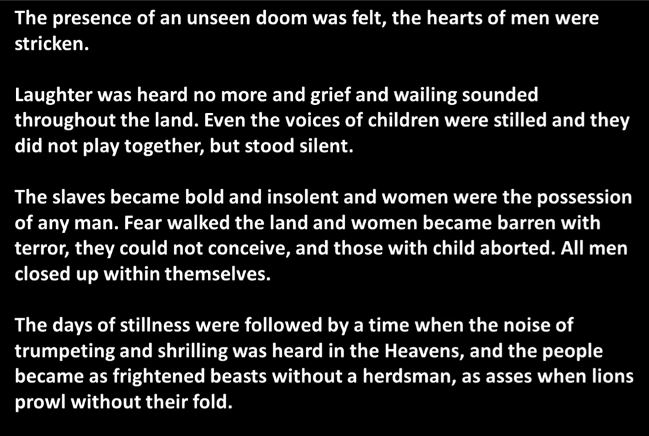 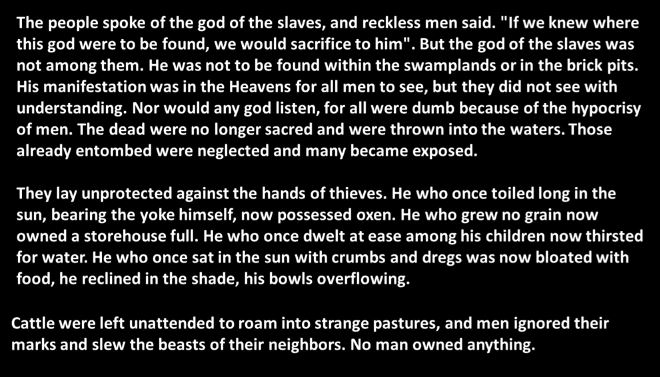 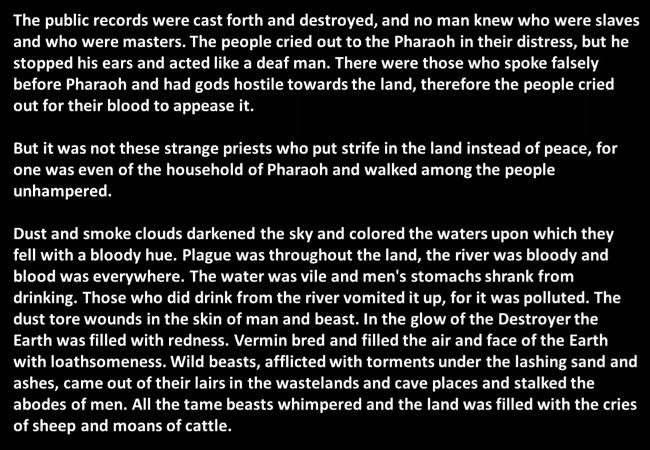 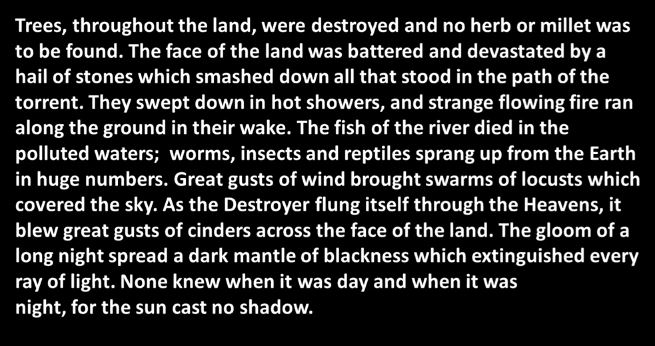 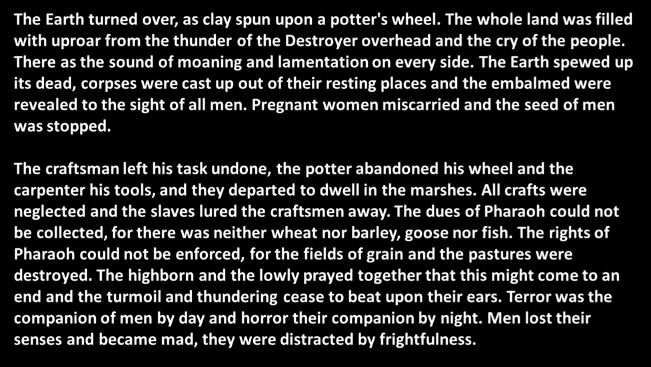 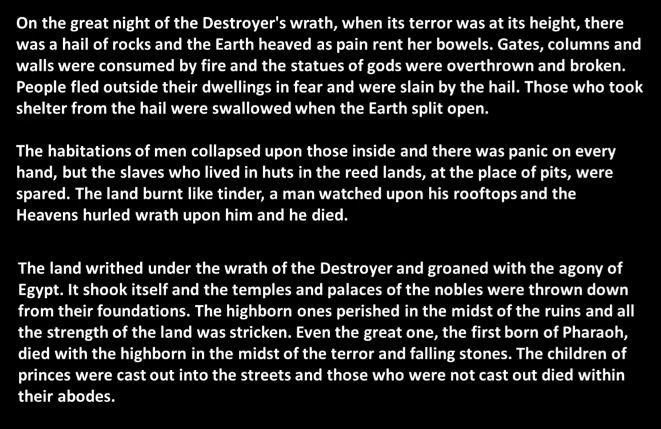 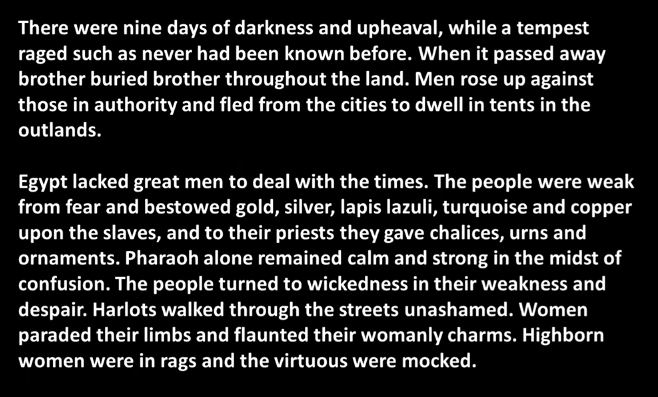 And of course the media with its predictive programming…

CHAPTER 3 THE DESTROYER – PART 1 FROM THE GREAT SCROLL

Men forget the days of the Destroyer. Only the wise know where it went and that it will return in its appointed hour. It raged across the Heavens in the days of wrath, and this was its likeness: It was as a billowing cloud of smoke enwrapped in a ruddy glow, not distinguishable in joint or limb. Its mouth was an abyss from which came flame, smoke and hot cinders. When ages pass, certain laws operate upon the stars in the Heavens. Their ways change, there is movement and restlessness, they are no longer constant and a great light appears redly in the skies. When blood drops upon the Earth, the Destroyer will appear and mountains will open up and belch forth fire and ashes. Trees will be destroyed and all living things engulfed. Waters will be swallowed up by the land and seas will boil. The Heavens will burn brightly and redly, there will be a copper hue over the face of the land, followed by a day of darkness. A new moon will appear and break up and fall. The people will scatter in madness. They will hear the trumpet and battle cry of the Destroyer and will seek refuge in the den in the Earth. Terror will eat away their hearts and their courage will flow from them like water from a broken pitcher. They will be eaten up in the flames of wrath and consumed by the breath of the Destroyer. Thus in the Days of Heavenly Wrath, which have gone, and thus it will be in the Days of Doom when it comes again. The times of its coming and going are known unto the wise. These are the signs and times which shall precede the Destroyer’s return: A hundred and ten generations shall pass into the West and nations will rise and fall. Men will fly in the air as birds and swim in the seas as fishes. Men will talk peace one with another, hypocrisy and deceit shall have their day. Women will be as men and men as women, passion will be a plaything of man. A nation of soothsayers shall rise and fall and their tongue shall be the speech learned. A nation of law givers shall rule the Earth and pass away into nothingness. One worship will pass into the four quarters of the Earth, talking peace and bringing war. A nation of the seas will be greater than any other, but will be as an apple rotten at the core and will not endure. A nation of traders will destroy men with wonders and it shall have its day. Then shall the high strive with the low, the North with the South, the East with the West, and the light with the darkness. Men shall be divided by their races and the children will be born as strangers among them. Brother shall strive with brother and husband with wife. Fathers will no longer instruct their sons and their sons will be wayward. Women will become the common property of men and will no longer be held in regard and respect. Then men will be ill at ease in their hearts, they will seek they know not what, and uncertainty and doubt will trouble them. They will possess great riches but be poor in spirit. Then will the Heavens tremble and the Earth move, men will quake in fear and while terror walks with them the Heralds of Doom will appear. They will come softly, as thieves to the tombs, men will no know them for what they are, men will be deceived, the hour of the Destroyer is at hand. In those days men will have the Great Book before them, wisdom will be revealed, the few will be gathered for the stand, it is the hour of trial. The dauntless ones will survive, the stout-hearted will not go down to destruction. Great God of All Ages, alike to all, who sets the trials of man, be merciful to our children in the Days of Doom. Man must suffer to be great, but hasten not his progress unduly. In the great winnowing, be not too harsh on the lesser ones among men. Even the son of a thief has become Your scribe.

CHAPTER 4 THE DESTROYER – PART 2 FROM THE GREAT SCROLL

O Sentinels of the Universe who watch for the Destroyer, how long will your coming vigil last? O mortal men who wait without understanding, where will you hide yourselves in the Dread Days of Doom, when the Heavens shall be torn apart and the skies rent in twain, in the days when children will turn grey-headed? This is the thing which will be seen, this is the terror your eyes will behold, this is the form of destruction that will rush upon you: There will be the great body of fire, the glowing head with many mouths and eyes ever changing. Terrible teeth will be seen in formless mouths and a fearful dark belly will glow redly from fires inside. Even the most stout-hearted man will tremble and his bowels be loosened, for this is not a thing understandable to men. It will be a vast sky-spanning form enwrapping Earth, burning with many hues within wide open mouths. These will descend to sweep across the face of the land, engulfing all in the yawning jaws. The greatest warriors will charge against it in vain. The fangs will fall out, and lo, they are terror-inspiring things of cold hardened water. Great boulders will be hurled down upon men, crushing them into red powder. As the great salt waters rise up in its train and roaring torrents pour towards the land, even the heroes among mortal men will be overcome with madness. As moths fly swiftly to their doom in the burning flame, so will these men rush to their own destruction. The flames going before will devour all the works of men, the waters following will sweep away whatever remains. The dew of death will fall softly, as grey carpet over the cleared land. Men will cry out in their madness, “O whatever Being there is, save us from this tall form of terror, save us from the grey dew of death.”