The last hour or so, birds outside have been sounding (again) like it’s time to duck-and-cover. Ominous grey skies of messed-up geoengineering ‘clouds’, near-scirocco winds, and I sense a disturbance in The Force amongst our community.

Now is a good time to share the calming Ascension Tea© I make for myself. It’s not an everyday thing, because it is made from Valerian Root, which contains the chemical formula copied to make Valium, AKA Mother’s Little Helper. It’s really simple to make, and just adds a slight sense of calmness: nothing dramatic. Certainly not as dramatic as the day (and days ahead). 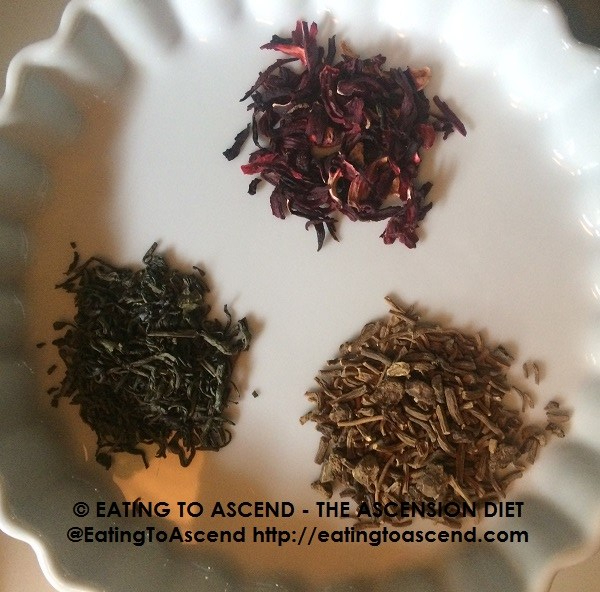 All I do is put equal proportions of the three into a pot of distilled water that has come to a boil but is removed from the burner. Add the herbs, steep 10 minutes, strain through a metal sieve, add honey, stevia – or not – raw ginger, MSM and VitC are optional. I add the MSM and C always, and have learned to appreciate the lack of sweetness. Raw ginger is good in it, and so is lime juice (or lemon).

I love the ruby color from the hibiscus! (This is also a great tea for Herxing.) The MSM and Vitamin C each help clear the cells as strong antioxidants. MSM gives us sulfur we really need to combat the cellular destruction caused by geoengineering and 5G, LiFi, etc. Parasites cannot stand raw ginger, which is why it is known as anti-cancer and anti-inflammatory. Both are mislabeled cancer, when really, disease is caused ultimately by parasites, the biggest one being Lucifer.

This tea actually does raise your vibration within your cells. You will sense it working immediately. Your spirit and soul need this now, in the time of geostorm electromagnetic frequency shift of the crossing of Nibiru the elite hide with the weaponized weather.

I explain all this in the FREE CHAPTER of my book, EATING TO ASCEND – THE ASCENSION DIET, which you can request by contacting me through the Let’s Talk tab!

I apologize for the brevity of this post. Trying to figure something back-end out here. I do wish we truthers could work together now in a real way, instead of each laboring separately. So much to learn, the curve is high, time decreasing.