And to the west…

It is not difficult to note that when the proximity of the Nibiru system is so visually clear that the geoengineered cloud cover – AKA “weather” – does not hide the red celestial body dominating the sky at sunset, they spray after darkness falls, and all night long, spraying heavy metals and chemicals which are activated by directed (aimed) frequencies from satellites and ground stations to activate and disperse these toxic products and make an obscuring mist to obfuscate what we would see in the morning that was evident the previous evening. (Yes I like long sentences, grammar nazis. Speech was weaponized by the likes of you. Has anyone noticed that the vernacular in the Emerald Tablets of Thoth sounds just like Yoda (of #starwars fame) talking? Hmm?)

As you can see in the above images, the previous evening’s sky 10/3/2018 (you are looking west/northwest, because, as you may not have realized, the binary suns set in the northwestern vicinity of the atmosphere), from the vantage point of the origination of the photograph, this sky is clear, and it was clear all day. But WHOA – magic! Sorcery! There’s cloud over the sunset! Imagine that!

*So you witness them making the weather to disguise the Nibiru system.
From daily observation of the planetary system in our skies here, I have observed that if the crossing pass is very close for a few days in a row, they make it rain for those days, in complete contrast to what is expected of weather for the season.
*If you have eyes to see. Not all do. One is chosen – elected – and it is possible to ~wake up~.

It is hypothesized by many that the recent “monster hurricane event”, Florence – “this is going to be a big one”, every purportedly-to-be-impacted state official said – was HAARPed into existence only to hide the proximity of Nibiru The Destroyer.

Recently, the YouTube channel host of JonXArmy captured a telescopic image of the feathered serpent in infrared with a 400mm lens. Looking at the capture, watching it move through space, corroborates every cultural mythos and story about this being, known as Quetzalcoatl, Kukulcan, Amaru (America derives its name from that: Amaruca), Viracocha, the nachash, Oannes, Prometheus, the red dragon, Ophucius… Enki… 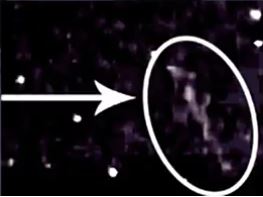 JonXArmy reached out to his 100K+ subscribers and shared the footage, and in discussion, was recommended to have Zen Garcia in an interview about this. If you did not know, Zen has compiled over 25 books of ancient texts, and published them with his editing commentary. His zealous reading and research has pieced together portions of our true past that, like other researchers (Steve Quayle, Graham Hancock, Gary Wayne, Ron Wyatt, Zecharian Sitchen – despite flaws, and many more), make what the elite from every age going back to the first one have endeavored with every might they have. Which, actually, they took i.e. stole from us via deception.

Here’s a video – it’s long, two-and-one-half hours, I haven’t watched it – with another authority on mankind’s true history, David Carrico, called Legend of the feathered serpent – The BIGGEST religious cover up in History, “with Special Guest Zen Garcia. 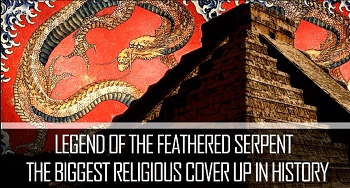 We will be discussing the worship of the feathered serpent across the antediluvian plane during primordial times. We will in the show also be tying the fall and rebellion of Samael, and other Seraphim angels to the nachash’s beguilement of Eve in Genesis chapter 3 and Revelation 12’s allusion to the Dragon, that old serpent’s deception of the whole world.”

Most of them. I repeat: If you have eyes to see. Not all do. One is chosen – elected – and it is possible to wake up (because you are chosen to in this time, but you still must choose, it all comes down to our free will, the fate we choose.

Which is why I write. To get the word out. Why I take pictures. Why I share. Those who know are expected to help others. So if you agree with what you read and see here, please share my blog. Let’s help others. Our Great Commission.

It’s the feathered serpent! In a video! We see it with our eyes! Omigosh, the homeland insecurity saying finally has merit! If you see something, say something. I am, and so are others. Please listen.