I just came across this article about how telescopes all around the world “have been shut down because of the Covid-19 coronavirus” and am in never-ending astonishment at how lied-to humanity is by the depraved psychopaths orchestrating this false flag of all false flag events. To call the 5G rollout Covid-19 Coronavirus THE STRONG DELUSION almost seems even still NOT strong enough! How is it even possible to descend to such extraordinarily evil depths of deceit!

There is so much disinformation on just the splashpage of this article:

I just keep truthing. Fear is not in my vocabulary, and we cleanse the bloodlines for all of our generations (seed), and I heart communicate, so my family, I’ve got them, even if they have shunned me.  As star beings, free of the constructs of dimension and time, the power of love is illimitable. Our greatest weapon is LOVE.

Here’s the mindset we’re dealing with:  I’m talking with an early 30’s, bright, articulate Indian man who is “into ascension”, and instead of at least making a note on his phone or a voice memo, he pulled out his smartphone and told Siri to remind him to go to eatingtoascend.com at 2PM! And we were just talking about the dangers of cellphones, the soul trap and AI!

DEWS and CHEMTRAILS and BEING DERIDED FOR HELPING THE WORLD

The government planned and developed placing WiFi microwave activated nanobot nanotechnology in the air, foods, and all products at least as early as 1995. 5G switches on the nanotechnology in human bodies, causing a cytokine storm and either a massive heart attack or pneumonia occurs very quickly. If the cabal’s victim is not directly targeted, it takes on the average six months to suffer the cellular damage weakening the individual to have such a deficient immune system that a negligible flu or virus or bacterial or parasitic infection/infestation will kill them. This is the delusion with which they have mounted the most massive disinformation campaign humanity will ever experience – and they are going after dogs too. 5G is the deadly force, not the viral material from their trash genetics people’s immune systems are trying to reject. They made it so, and that is the plan of every agenda and document one finds. The media has a special place in hell. This article will bring you up to speed very fast: Was The COVID-19 Test Meant To Detect A Virus? 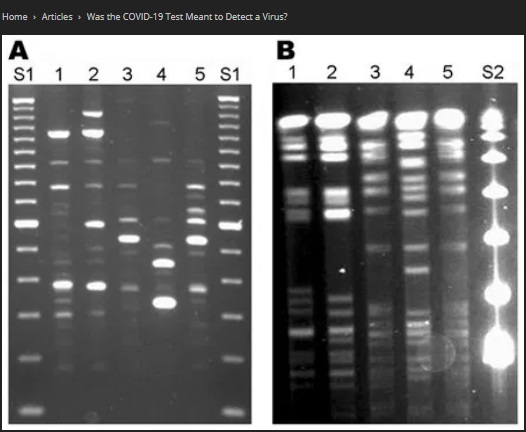 Download “Was the COVID-19 Test Meant to Detect a Virus?” in PDF form

“The virus is also a sweeping metaphor for the spread of “misinformation,” which means anything outside their religious doctrines, not recognizable by classical virology… The code, the potential scenarios, the mysticism and superstition about how the virus spreads, must not be questioned, If you wish to remain a person, as opposed to an un-person.  It’s a form of post-globalist environmental socialism gone malignant: Demand that all people submit to an equal chance to be killed by a virus. Act out the theatrics of worshiping the virus with fear as the measure of inverted faith… The reason the globalists are obsessed with “spread” and “viruses” is because they want to shut down all forms of communication and information exchange that threatens their New World Order.” 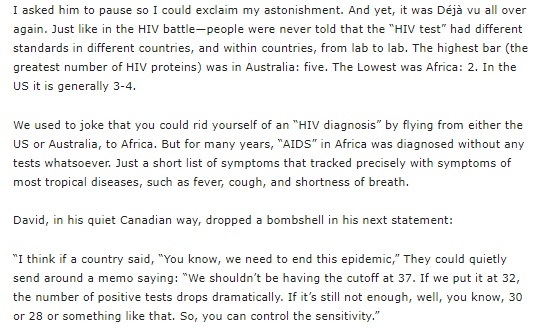 This is exactly what was done with the ELISA WESTERN BLOT test for LYME Disease, and United States test results for Lyme – if done at all, I was refused testing by the health system cabal – bars were removed from the sample.

THE SOURCE ABOVE IS STILL REFERRING TO “VIRUS”.

VIRUS IS A CODE WORD FOR 5G.

Remember, EVENT 201 was the dress rehearsal for this. NSA whistleblower Edward Snowden warned that the corona crisis is used for the massive and permanent expansion of global surveillance. The renowned virologist Pablo Goldschmidt spoke of a “global media terror” and “totalitarian measures”. Leading British virologist Professor John Oxford spoke of a “media epidemic”.

If you allow THIS TO BE DONE TO YOU OR YOUR LOVED ONES you have TAKEN THE RFID MARK OF THE BEAST.

SPACE-BASED POWER SYSTEM WEATHER MANAGEMENT PATENT US20060201547A1 clearly explains how Direct Energy Weapons are powered, and includes all the diagrams and technical schematics of the mirrors, lens arrays, filters and membranes they are using to hide Nibiru from humanity. Please watch the video showing this appararatus which captured NASA’s atmospheric witchcraft in Alaska a few weeks ago. In concert with 5G being brought online all across the face of the earth, beginning in Guayaquil, Ecuador in September 2019 – look at this video to see the bodies washing up on beaches and lining streets, fields and cemeteries, it’s a little past the six month mark distinction Wuhan, China has, but 5G WAS TURNED ON THERE FIRST.

Aluminum foil works best if in at least a dozen layers. Iodine is required to keep the thyroid clear. Tomorrow the 5G helps re-write is coming, meanwhile read this from last fall, and this (and everything else I have written lol). 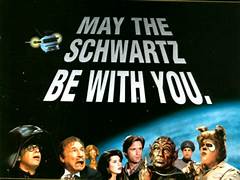 The featured image is from SPACEBALLS, a parody of STAR WARS that I highly recommend! When my son Max was five years old I bought the video and he watched it and within a few viewings had it memorized! If I got angry with Emily or Max (my children, not my granddaughter Emily, I have never been angry with her, and she has the purest spirit I have ever known), they would say “Mom’s going plaid again!” Of course then we’d all laugh, and since I was a single parent, and we were pretty close compared to many single parent families, when we laughed together it was beautiful.

As an Amazon affiliate, I earn from qualifying purchases, and this article may contain affiliate program links. All earnings go toward defraying the costs of this blog, and your purchase through these links helps me help others.