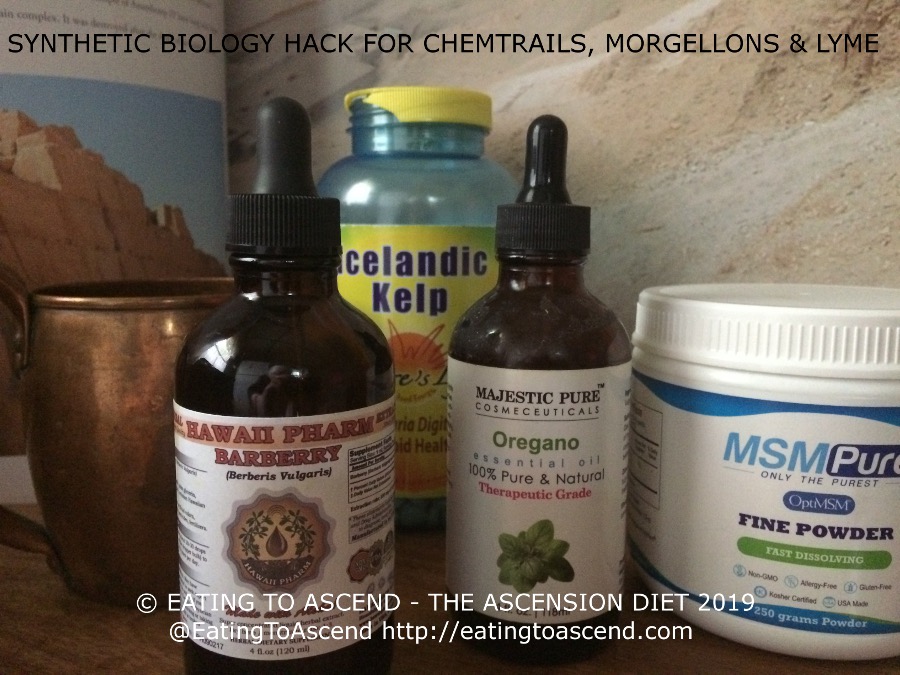 For the all the reasons we know, and particularly the bringing in of entities with CERN, establishing ‘homes’ for them with the proliferation of heavy metals, geoengineering particulate matter in air/water/all biological and non-biological systems, vaccines, foods, drugs, products, pesticides – including those which change sex, causing transgenderism – plastics/BPA, and most criminally, the spread of Morgellons and Lyme created to kill us… all of this, with the food, water – especially rain and ground table – is LOADED with synthetic biology GMOs – genetically modified organisms. Coupled with the nanotechnology in everything and everyone, they are making people parasites themselves, unless they detox. And even then, it is a constant battle. We must never become complacent. They up the ante exponentially – beyond exponentially – constantly.
They’re desperate. Desperate despots of evil.

I’m not sure how much people notice the nanotechnology – the metal in our mirey clay – as it encroaches and hijacks our processes. Maybe it’s because I have Morgellons on top of Lyme, which was actually the last straw for my immune system. Because of the devastastation on my monetary solvency – and just not having my lifetime of things and identity anymore, stolen ultimately by MKUltra-controlled perps who were family, the closest being my children, enabled and encouraged – and rewarded with a promise of being beneficiaries to a life insurance policy he has no right to have on me, as we had no children, owned no property, and what we did have, the one thing in both our names, was my 2004 Ford F350 Diesel longbed truck, which the judge awarded him in a court-sanctioned theft.
And yes, I repeat this. I will not stop saying the truth. I started speaking out against wrong as soon as I could talk. My life was stolen, I lost my family I’d raised as a single mother, I am owed $44,000.00 in child support never paid for my two children, an atrocity done to me/us by the same court system, same county.
Tell me that’s not evil.

And in the last few days, my speaking out on the issue of spiritual responsibility within the journalistic truth community has been yet another stand taken that had to be, ethically, but ethics in this mad world has a price.

I think that the nanotechnology is in full force now, and we know the 5G is too. Together, as we have been warning one another, the heat is on. (Terrible saying, but fits.)

I already have been doing Iodine, and started in 2011, actually, when the Lake Anna nuclear reactor became a threat because of the Mineral, VA earthquake, not far from me at that time. Iodine protects from radiation, storing in your thyroid, “holding space” as it were (ionically) so radiation (Cesium) can’t pick up. Then when I had to face the Morgellons nightmare, along with the Lyme that medical establishment refused to diagnose and treat, I began Lugol’s Iodine therapy, and also used seaweed in brown rice weekly (I’ll post that recipe protocol tomorrow; it’s late here). I’ve worked up to 50 vertical drops daily of 15%, with only rejuvenating, healing effects.

There are lots of other helps (hacks), but this one is for NANOBOTS.
NANITES.
NANOTECHNOLOGY.
SYNTHETIC BIOLOGY IN US.

In a cup of distilled water, add at least 3 (I do 12, work up to it) drops of Oregeno essential oil, a full dropperful of Barberry Tincture, a teaspoon of MSM – methylsulfylmethane, and take 3-5 kelp tablets, or 10 – 20 vertical drops of, say, 5% Lugols. Sometimes I put some DMSO in. I already am ingesting the DE – diatomaceaous earth and BC –  bentonite clay daily. We really have to mostly live on superfoods, the bread’s a nod to some kind of comfort, and chewing is an addiction, sadly.

Taping a niobium magnet to the right carotid vein (returns blood from the body, keeps metals which are nanos from entering the heart valves and chambers – and brain) at night is a must (pacemaker alert though).

A copper wrap bracelet on each wrist. Drink water from a copper cup (infused; Ayurvedic). I have been wearing shungite since early 2017, and chunks of it are in all my cymatically word-structured home-distilled water. A slab of Pink Himalayan Salt 12″ X 12″ X 3″ is behind my head, another bedside, with the organite I make, and I wear hematite and pink quartz beads, and lovely spires of clear and amethyst quarts points grace nearby as I sleep, too. I have no wifi, LED things, no smart devices. Only this old laptop. Pretty Luddite!

I am sorry, I wish there was more of me to give posts to you, to write more to share… I started making organite in early 2017 as well. I had to go balls out. I couldn’t walk anymore. My family is still gone though. But I have FAITH. GOD HAS ME. I’ll get to it.

GOD HAS YOU. He has us all, especially the deniers who are living their days hating us.

WE ARE THE PERSECUTED SAINTS. I was thinking of this earlier, while at the laundromat (a stealth op since it’s so chemically toxic, but the moldy basement here is worse, so I don’t use it and the landlord is… ugh…). In the age now where Lucifer has, with science and reason, convinced the masses he doesn’t exist, and there are so many of us humans, how else but through technology (duplicating life) to set us up in gaslight of revile as they do and we are the new lepers and fools, cast off, lives ruined?

Another thing, and this is HUGE.
A few weeks ago, I wrote about the pinpricks of pain and electric shot feelings, stabbing needles, muscles seizing.
Others are reachig out to me, and also people who I interact with in public who have no clue as to this reality or what I write with you here about.
PAIN IS EVERYWHERE. The unawake internalize it and project it upon others.
It’s like a sharkfest out there.

THE MIND CONTROL MANIPULATION TO CAUSE PEOPLE TO HURT EACH OTHER, OR FEAR BEING HURT, IS BEYOND WHAT EVEN SOMEONE MKULTRA’D LIFELONG IMAGINED. IT IS CRITICAL THAT WE – EVEN WHEN SAYING WHAT WE MUST, TO STAY THE COURSE – KEEP LOVING AS WE DO SO. WE ARE ON THIS BATTLEFIELD TOGETHER, AND THE WAR IS AGAINST US, NOT AGAINST ONE ANOTHER.