#TRANSGENDER #GAY #LESBIAN #BISEXUAL = #PERVERSION and is engineered by the elite to destroy mankind and all creation. People are so brainwashed, fluoridated, sedated and drugged, in electromagnetic, chemically induced comas distracted by their instant-gratification consumption and idolatry both selfie and societal that they willingly submit themselves and their children as sacrifices to this evil.

They are under the spell of #witchcraft. “The general population doesn’t know what’s happening and it doesn’t even know that it doesn’t.” – Noam Chomsky (The power of the Tavistock Institute and media programming.)

I have witnessed this disgusting immoral explosion unfold since childhood, when my mother’s hairdresser – I was twelve and this was 1971 – had a sex change operation through Johns Hopkins University, and changing his name from Steven to Stephanie. I thought it was gross, even then. This was #Baltimore in the early Seventies. My mother had a jet black 12-curl #beehive, very #JohnWaters, yes. 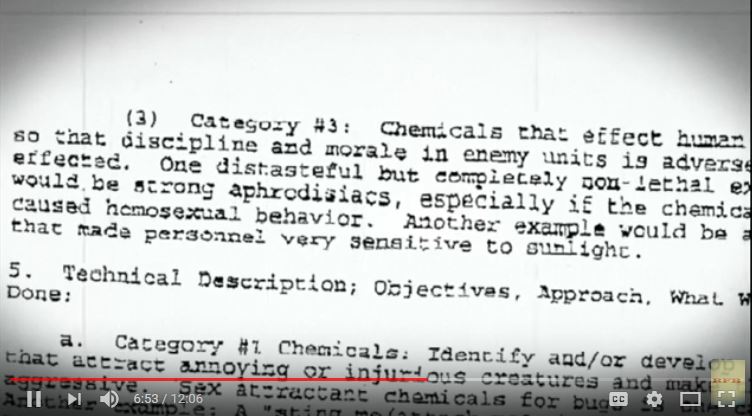 NOTHING makes this right, this agenda to change humans. Grabbed from the video, here’s a snippet from a military document from the 1950’s which discusses using biochemical warfare to cause #homosexuality

I first spoke out about my concerns regarding #GMOs and #BPA, #manboobs (#moobs), #bee #colony #collapse and hermaphrodite amphibians, children developing sexually earlier than ever, and the increasing numbers of gays – and Facebook being a voluntarily submitted CIA database as far back as 2005 on #MySpace, and then #Facebook. Due to the extreme #MKUltra #gangstalking and #targeting I am under, my youtube channel is pretty much a failure, and I really do wonder why this blog gets no traction here on WordPress and Twitter, unless, of course, I’m censored, which, by the process of elimination is the only conclusion.

One does not garner many warm fuzzies with a viewpoint such as mine. So be it.
I’VE PICKED MY ADDRESS.

The heartbreaking part for me is, I can’t pick my children’s or grandchildren’s.

Here’s the video from #RichiefromBoston, God bless him…