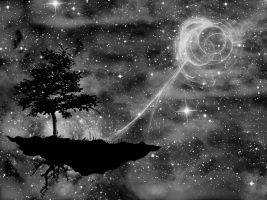 Yes, a moon report, as someone has to record this sh#t. Not one of my friends or neighbors notices, or, if I ask them, even seem to care. And if they are somewhat awake, they’re largely cynical, an “I can’t do anything about it, so I don’t need to know or care, this place sucks and we’re all gonna die anyway” epitome of apathetic attitude pervades. So sad.

As has become my observational pattern, I watched for the skies to darken, which happens way after 9PM. At 9:30, when I checked, the moon again just suddenly appeared,  high now in the W/SW area of the sky. It did not rise, it was just all at once there, as high in the sky as the night before, June 20th, if not a bit higher. And it was just a few MORE degrees south of due west, but not by compass calculation, rather the orientation of the house, and the window I look out of.

It appeared smaller in size and further away, by virtue of being higher. It really seemed to be receding on a straight, diagonal trajectory, not arcing. What is most significant is that, unlike the moon from the night before, there was no setting. The moon loomed smaller, and then by 12:30AM, it was gone.

Ah, found in my notes from April…
Yesterday 29Apr, the Sun set at 302′ NW according to compass.
The moon was suddenly full on 28Apr, setting just before 6AM EST due W, more large and so bright it hurt the eye to look at. The full moon was not scheduled to appear until the 30th.
Is this from the pole shift occurring, as Nibiru has appeared, as well as its four fellow planetary bodies accompanying it?