On January 13, 2020, I attended a birthday celebration for the son of the babaji at the Mast Ram Ashram in Rishikesh. I was invited by the family, having become friends after I was asked to help their with their business, a prominent high-end hotel offering yoga retreats, doing some content development for their website in exchange for meals and edifying company. India is like that.

After experiencing the feast meal, a first for me here in India, sitting on the ground in rows being served from buckets by monks, and eating off of shaped leaf plates that afterward the cows would consume – no manmade products – the yoga instructor and I went down to the beach to join many others from the immediate family who were sunning, playing games, chatting, doing yoga.

That beach is called GOA BEACH by locals here, as it has a broad expanse of sand, reminiscent of tropical beaches of Goa in the south of India.

I took photos of the banks, people enjoying playing on the rocks and sand, did some headstands and held my tree pose for the longest ever, and then went off to a quiet spot to simply absorb the ambience, relax and meditate. I love people very much, but am a loner at heart. I spread my shawl on the sand about a dozen, maybe fifteen or sixteen  feet from the inner contour shoreline sandbank where there was a quiet inlet, with no rippling waves from river rafting boats, no surges, no one playing and running in and out of the water. I laid down on my back with my head facing away from the early afternoon sun,  and wriggled around like a just-groomed horse in dust to make a comfortable impression of my body shape to rest in, and with my eyes closed and hands in Mudras, began to meditate.  (I learned to make these sand body snugs in Hawaii from a native there when I went to the Big Island in 2012.) My carrybag was against my right side, the strap looped around my arm, as I always do when I am in public places, to prevent theft and loss.

I am not sure how much time had passed: two minutes, five, twenty, but I was suddenly brought to consciousness by the yelling of my yoga instructor, who said “Durga, the water! Get up! You have to move! The water has come up to your head and your computer is going to get wet!”  I looked toward the sound of his voice, opening my eyes. His arm was extending and he was pointing at the inner water’s edge just past my head.

Having been in a very powerful state of thought-free bliss and forced by his urgency to react, I raised my head and shoulders, turning toward where he was standing and gesturing at, and brought myself up, my right hand pushing against the sand. I saw that there was a straight, narrow and absolutely direct channel coming from the inner bank that ended in a circle which had stopped just inches from the depression my head had left in the sand. Vaibov, the yog, looked very alarmed, and as I continued to stand up, not taking my eyes from what I saw, I looked for a reason, some irregularity of current, something – anything – that would cause this, and was it moving even at all, this water. I asked him how much time had passed since I’d laid down, and he said he didn’t know. That he “looked over and the water had all at once come up to me.”

Standing now, I looked from the left to the right of where this absolutely straight and solitary channel had made its way to my head. There was no rushing current on the bank. No rocks or branches, no animals, no sand bar. No footsteps. No plastic bags, trash, turtles, fish… no wind.

THERE WAS NO NATURALLY OCCURRING, RATIONAL EXPLANATION FOR THE PHENOMENA.

By then others began running over to see what Vaibhov and I were looking at. It was inexplicable, and everyone there saw it. The water of the Holy Ganga River had deviated from its own course and made a perfect circle halo at the top of my head, my crown chakra. And it stopped there. As we watched, standing, that was as far as the water went, and eventually the sand resumed its shape as if a hand brushed it back into place. 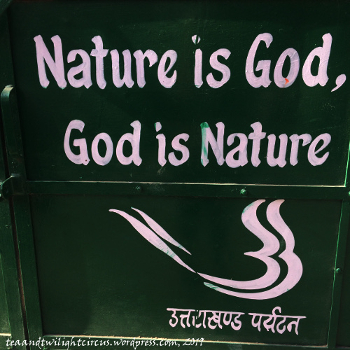 All there with me witnessed this. The son of the babaji whose birthday it was who owns the hotel said I was “blessed by Nature Herself” (their family is Sikh, and they conceptualize GOD as nature).

I only know that I felt very happy, in a quiet and still place within. I felt honored, and this event was a confirmation of something inside so profound I can only say that it is supernatural and very real. I was shown love by the angel of water, the water from heaven, the Ganges River. I am indeed blessed. No mechanical reason exists fot this happening, the deviation of water in a perfect channel to form a perfect pool at the top of my head in the sand. It wasn’t windy, there were no branches or debris or rock promontories on the channel’s water and bank edges to have caused some singular current to do what we all saw. The inlet was still, no ripples. If only someone had thought to take a photo! I did not, enraptured in a moment more profound even than when I had my son Max by a completely natural VBAC (vaginal birth after caesarean).

Water is LIFE. I go to the the Mother Ganga as often as I can. I don’t make a ceremony of it: no need. After the welcome I received from this Universal Emissary of The Divine Consciousness, the very water of heaven, I feel an abiding inner gnosis (knowledge of Truth) of who I AM. There is no question. It’s like the fruit of any chosen yoga: writing, sewing, making art, gardening and horseback riding and the voice and heartbeat of the Creator: LOVE. Pure peace and boundless bliss.

I keep Ganga water close, in a jug next to my head as I sleep has a resonance stronger than any structured water one could make with intention and words. I say this with the certaintude of experience firsthand, having used cymatics to structure both my pure distilled drinking water and kombucha I make with words.

Besides blessing myself with it, and sprinkling it in my living space, its very presence eliminates archonic negative energies for more powerfully than any organite, shungite or ormus. This is the waters which were divided, and I’m graced to share what happened here with you.

As an Amazon Affiliate, all purchases go directly to supporting this ministry. I recommend this water distiller by ECO-WORTHY!

As the only human sharing the whole truths that were hidden: that Jesus Christ taught how to detox and remove the ropeworm serpent in the gut, how to disable the Magnet Assisted Transfection of the BioAPI, and how to protect against the 5G SOUL TRAP connection crafted by Satan to destroy humanity and prevent souls from translating to return to be with The Creator at the impending Singularity Event which is Christ the LIGHT Itself as The Nibiru System gets closer daily, I am under great spiritual attack. This includes being sabotaged by demons who appear as humans, the most recent being a failed attempt to improve this ministry's outreach with a web developer whose hidden agenda - ego driven by parasites - an object lesson loss of time and investment. All glory and praise to the Living GOD for the true church body of believers. If the words I am given to share with you help you, please give back, so I can continue to bring these messages to others.
In Christ, Pastor Laura, @EatingToAscend

Search by clicking a word to see what I’ve written about it!